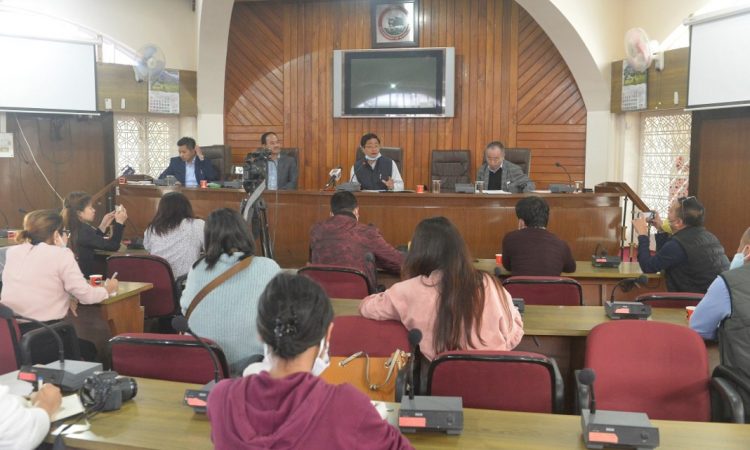 Budget deficit for 2020-21 projected to increase by Rs 955.44 cr
Kohima, May 1: The ongoing 40-day long nationwide lockdown is taking the financial toll on the resource crunch Nagaland state compelling the government to seek special dispensation from the Centre.
Briefing media at the State Civil Secretariat Conference hall here Friday, Additional Chief Secretary and Nagaland Finance Commissioner, Sentiyanger Imchen informed that the impact of COVID-19 pandemic is not an issue to be viewed solely from the medical angle, in fact, its devastating impact on the social and economic spheres far exceeds what the world has witnessed so far.
In view of the negative financial impact the State is already experiencing and the likely negative impact in the coming months, Nagaland Chief Minister Neiphiu Rio has already written to the Prime Minister Narendra Modi, said Sentiyanger.
He said the Chief Minister has projected that the current estimated monthly receipt of the State, inclusive of Revenue Deficit Grant (Rs 326.42 cr), Share of Central Taxes (Rs 307.77 cr) and Own revenue (98.03 cr) is estimated Rs 732.22 crore while total expenditure including Salaries (Rs 419.55 cr) pension (Rs 182.33 cr), interest payments (Rs 99.62 cr), power purchase (Rs 32.67 cr) and other recurring expenses amounts (Rs 77.67 cr) to Rs 811.84 crore resulting in monthly cash shortfall of Rs 79.62 crore and annual shortfall at Rs 955.44 crore.
“With such huge shortfall in our revenue, I am concerned that we may struggle to pay even salaries and pensions” (of government employees), Rio told PM in his letter, dated April 25 last, which was made available to the media by the Finance Commissioner.
The CM requested the PM to consider providing a special dispensation to help the State tide over the impending financial crisis.
Also through the letter, Rio also urged Modi to release the pending liabilities of Rs 529 crore under the erstwhile Special Plan Assistance which the NITI Aayog has already cleared.
Meanwhile, the State Finance Commissioner, Sentiyanger during the media briefing said that a review of the position towards the end of April shows that the level of deterioration in the State’s Own Revenue Receipts has been more than what was earlier estimated, and had fallen to Rs. 28.47 crore as on date.
Based on this actual position emerging, he said it is clear that the shortfall in the coming months may be higher than what we have initially anticipated.
He went on to state that the COVID-19 pandemic will also leave the Government with no choice but to allocate more funds for health infrastructure and other related areas which have not been budgeted, leading to increase in the levels of deficit.
Keeping these factors in mind, and rather than wait for the crisis to happen, the State Government has taken pre-emptive steps in the form of certain austerity measures which include – freeze on all fresh appointments, freeze on DA/DR in line with the decision of the Central Government, Cut on non-development expenditure including ban on purchase of vehicles and Pro-rata cuts on developmental expenditure which is under examination.
In addition, the State Government has also taken steps to augment the revenues of the State by increasing the rate of tax on petroleum products in the form of COVID-19 cess to supplement the resources of the State in fighting the COVID-19 pandemic at the rate of Rs 5 per litre of Diesel and Rs 6 per litre of petrol and other motor spirits effective from the midnight of April 28 last, he said.
On the circulation in the social media of the alleged huge amount released by the Centre to the State for COVID-19 related activities, he said the amount of Rs. 346.92 crore claimed to have been released for COVID-19 related activities is actually the amount released by the Central Government as Revenue Deficit Grant and the amount of Rs. 20.50 crore for the State Disaster relief Fund as recommended by the 15th Finance Commission.
He said the amount of Rs 20.50 crore released as first installment of State Disaster Response Force (SDRF) for 2020-21, out of which a maximum of upto 35% can be used for COVID-19 related activities, he said.
Further, the Finance Commissioner also informed that as on date, the State has received an amount of Rs 7.42 crore from Government of India and Rs 3 crore from North Eastern Council to combat the COVID-19 pandemic, while the State has already spend an amount of Rs 30 crore from its own resources. (Page News Service)