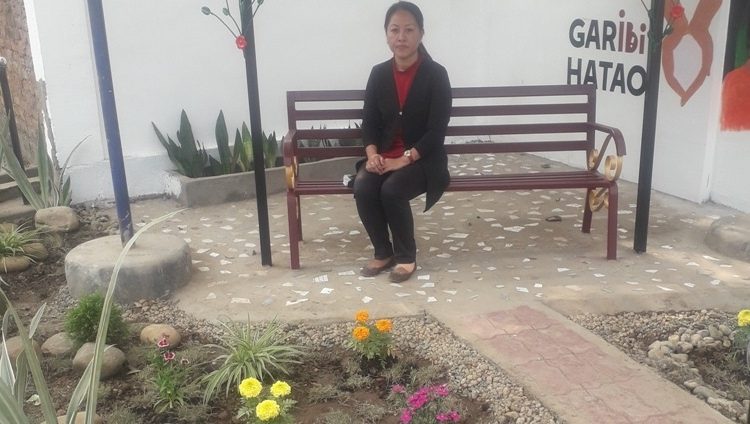 DIMAPUR, JANUARY 29: Civic work requires investment and maintenance. The task is more daunting when it comes to handling roadside dumping sites at a place like Dimapur town where there is lesser public awareness.
But this did not deter Ronika Miachieo from converting a dumping site in front of the entrance to the Directorate of Food and Civil Supplies, Nagaland, here into a mini park. She had joined the Directorate as a contractual employee 5 months back.
A graduate from the North-Eastern Hill University, Shillong, Miachieo, who hails from Kohima village in Kohima district, lives with her father at Burma Camp here.
“I believe that cleanliness is next to godliness. My aim is to protect the environment and also do something good for the people,” she says.
Though Miachieo sought help from others to work on the garbage site in front of the Directorate, her efforts did not meet with success. Then she got into the job with whatever little earnings she had. Later, a Pastor from a nearby area brought in his sister, who is an artist and painter, to do the paintings on the walls near the site at a nominal fee.
Miachieo, on her part, decorated the site with discarded toner cartridges used to print ration cards in the Directorate, and planted seasonal flowers. She also built sheds and installed benches for passers-by to rest at the ‘mini park’.
Miachieo said she started beautifying the place by spending her own money, though the Directorate of Food and Civil Supplies and some well-wishers gave a little monetary aid later.
She completed the work of turning the site into a mini park within a span of 4 months, which earned accolades for her from the Directorate. Additional Director Sentirenla Jamir and Deputy Director Lanu, and the people of the Hill View Colony where the Directorate is located, have also praised her for her unique initiative.
Apart from this, Miachieo provides books, stationery items and medicines to underprivileged students of 5 private schools in the Naga areas of Yinchungkhanmoi, Lakho, etc., in Myanmar along the Indo-Myanmar border. She has also set up a library in one of these schools.
When asked how she manages to get these items, Miachieo said some doctors here give her medicines, while other well-wishers provide her books and stationery items for distribution among poor children on the other side of the border. She said she visits these villages twice a year to distribute the items.
In 2018, Miachieo took up the challenging task of cleaning a 900-foot drain in the Walford area here. The Dimapur Municipal Council provided her with machinery and workers to help her clean the clogged drain.
Also an entrepreneur, Miachieo brings spices from south India and sells them in Dimapur and other parts of Nagaland. She also makes pickles and supplies them to other Northeastern States. She claims that she has been doing all this by herself to set an example for others.
(Courtesy: AT)