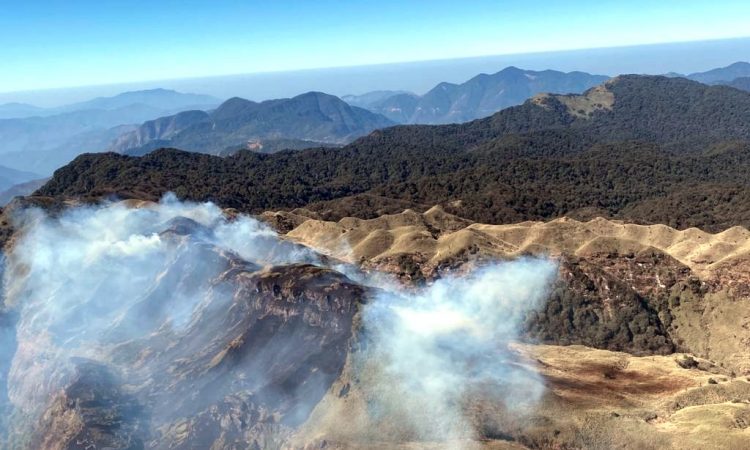 DIMAPUR, JANUARY 5: Chief Minister Neiphiu Rio on Tuesday undertook an aerial survey of Dzukou Valley to assess the damages caused by the forest fire as well as the operations being carried out to contain and douse the fire.

The Chief Minister witnessed the patches in the valley that had got burned due to the forest fires and saw the portions where the forest fires were still raging. He also observed the ground operations conducted by both the State and Central agencies namely the SDRF, personnel of the Forest Department, Nagaland Police, NDRF, along with the Southern Angami Youth Organization (SAYO) volunteers for making traditional fire line cutting to contain the fire and protect the valley, which as on date has been made over a length of more than 9 kilometers.
The efforts being made by the ground staff are being supplemented by 4 IAF helicopters making multiple sorties everyday to douse the fire.
“It was noticed that continuous efforts are being made by all the State and Central agencies and the traditional institutions for containing and dousing the forest fires. At many locations the fire had been contained and extinguished, but there were still some locations which needed to be focused upon urgently to keep the valley safe and protected. It was also observed that there were no damages yet due to the fire in the main part of the picturesque Dzukou Valley,” said a press release issue by the Chief Minister’s Office.
The CMO said after report was received of forest fires raging in the Dzukou Valley on December 29, the State Government requisitioned Indian Air Force (IAF) helicopter immediately. The District Disaster Management Authority (DDMA), Kohima, requisitioned police personnel, SDRF, Kohima Unit, Home Guards and Civil Defence and together with NDRF unit, Kohima Forest Division, along with large number of volunteers provided by SAYO successfully executed a traditional fire control line on December 31, 2020 and January 1, 2021 stretching over 7 kilometres to protect the most fragile part of Dzukou Valley.
Subsequently, given the situation, 3 more IAF helicopters were requisitioned by the State. Meanwhile two more units of NDRF personnel were also deployed from outside the State to contain the fire and all along the SAYO volunteers continuously camped in the valley to keep a close watch on the fire situation, the CMO release informed.
Appreciating the tremendous efforts made by everyone to prevent further spread of the fire and help keep the situation under control, the CM however noticing that at some locations the forest fires are still raging, desired for continued coordinated effort by all the agencies involved so that the situation is brought under full control and the pristine valley remains protected.
Accompanying the Chief Minister in his aerial survey were Mmhonlumo Kikon, Advisor (IT&C, NRE and Science and Technology), Medo Yhokha, Advisor (Higher & Technical and Election) along with Home Commissioner, Nagaland, and District Forest Officer (DFO) Kohima. (Page News Service)