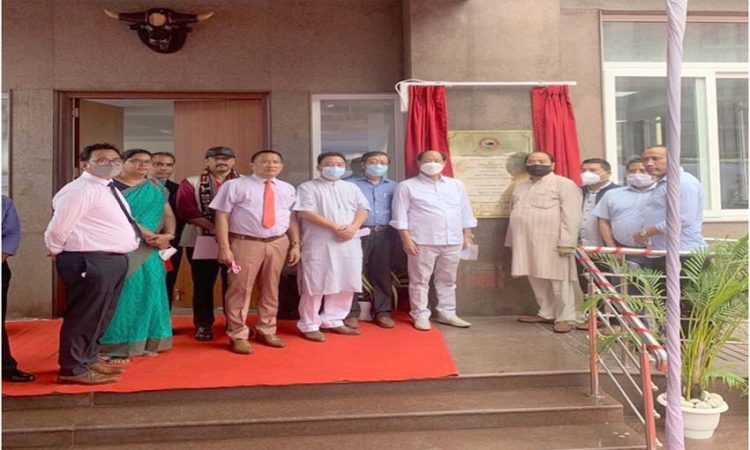 DIMAPUR, SEPTEMBER 4: Nagaland Chief Minister, Neiphiu Rio today inaugurated the Staff Quarter Type I, II and IIA and Community Centre for the Delhi Nagaland House staff at Sector 13, Dwarka, New Delhi.
Rio said it was ‘a dream come true’ for him since it was in 2004 during his first chief ministership, he had approached and requested the then Prime Minister, Atal Bihari Vajpayee for the present land at Dwarka.

Unlike other States, as requested by Chief Minister, Nagaland was allotted 2 plots and the land was given on reserved price for which he is still grateful to the late Prime Minister even today.
While appreciating the contractors and the Department for the workmanship, Rio said assets created by the Government should not be liability for us but it should serve the purpose for which it was created. He also gave a positive reply to Minister for Housing & Mechanical, Tongpang Ozukum’s request to provide more funds for completion of the remaining components since cost escalation will hugely cost the State Government if the project is further delayed.
The Chief Minister further said that the Government of Nagaland had achieved two assets in the capital at RK Puram and Dwarka and also one asset at Navi, Mumbai, in Maharashtra. He wished the officers and staff a comfortable stay in the new Staff Quarter which will enhance the health and spirit to continuously serve our people.
Deputy Chief Minister, Y Patton said that the long felt need and dream for Staff Quarter has been achieved today. He also mentioned that under the dynamic leadership of Chief Minister Neiphiu Rio, the State has progressed and he called him as a ‘Champion of Development’.
Patton further said that the Government of Nagaland has given beautiful staff quarter and a Community Centre, it will now be the duty of the employees to sincerely serve the Naga people who come to national capital.
Minister for Housing & Mechanical, Tongpang Ozukum, speaking on the occasion said due to Chief Minister Neiphiu Rio’s wisdom and far sightedness, the project was conceptualised 17 years back during his first tenure as Chief Minister of Nagaland.
The project took off in the year 2007 with 7 components – including Staff Quarter Type I, II and IIA; Community Centre; Power Sub-station; Basement Parking; Staff Quarter Type 4; Staff Quarter Type 5 and Twin Tower of which the first 4 components were completed and the remaining 3 components are under construction.

The Minister also acknowledged the DDA, Fire Department, Jal Board for being understanding and being accommodative for all necessary permission without many difficulties. Further, he thanked the Housing Department, officials, Engineering wings and Chief Residents Commissioner and all the officers and staffs for their support and assistants.
In the inaugural function, the officials present were Chief Resident Commissioner and Additional Chief Secretary, Jyoti Kalash, Secretary Housing, Kevekha Zehol, Chief Engineer PWD (Housing) Er.Yanbemo Lotha and Deputy Resident Commissioner, Wennyei Konyak.
(Page News Service)