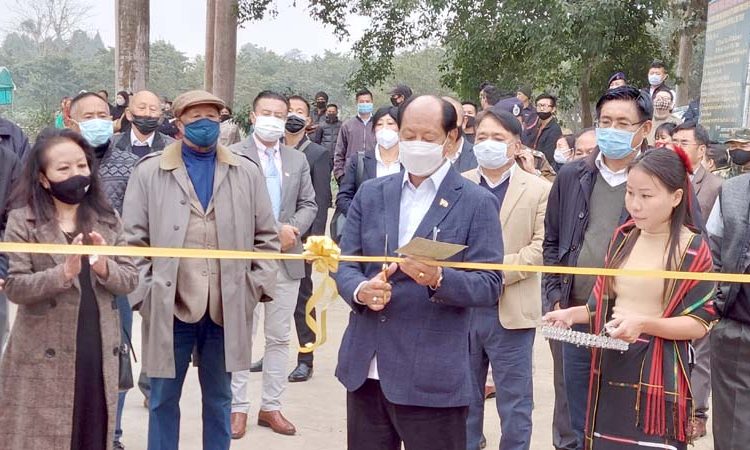 Says, more such recreational parks in the offing in Dimapur, Kohima

Dimapur, January 21: The erstwhile Green Park in Dimapur has been transformed into a Public Recreational Centre with added infrastructure and space for recreation.

Inaugurating the renovated Green Park today, Nagaland Chief Minister, Neiphiu Rio said that he had a discussion with the Horticulture Department and put forward the proposal that Green Park should not be confined to the Department alone but open for general public for utility, recreation, jogging and small meetings and other activities.
He appreciated and congratulated the Department for making the long felt dream into reality and said there are lots of works and upgradation to be done in the Green Park. He also expressed hope that in the future the Government can contribute to upgrade the public utility centre.
Stating that the Public Recreational Park is centrally located from Dimapur to Chumukedima, the Chief Minister said public will pour in from Dimapur as well as from Chumukedima.
He said many cities do not have master plan and therefore it has become a concrete junnel which gives a bad impression and the atmosphere is also very different. “In our Naga way of life we are used to space. We don’t know how to live in flats…we are not comfortable…this is not our life,” he said
“So by creating this public park, people will come for morning and evening walks with friends and families,” the Chief Minister expressed optimism and said people would have different outlook and mindset.
Rio said that Nagas have been backward and poor and only recently with statehood, they could see development and acquire education. “We are not yet civilized or you call it primitive in all our thinking and behaviour,” he said, adding the recreational centre will make a difference.
The Chief Minister also disclosed that he has already thought of creating another public park in Dimapur and in Chumukedima are and in Kohima. He said in Kohima, three places have been already identified. He said in Kohima, the Old Zoon has been identified, which can be converted into a public park, the Nagaland University Campus in Meriema and the Fishery complex in Thizama where there is a big lake. There is sufficient area inside which can be converted into a public park, he added.
Stressing on health of individuals, Rio said the people should take out time in their life for recreation to keep themselves healthy. “Health is wealth-A healthy society is always a prosperous society,” he added.
On the occasion, the Chief Minister suggested the Deputy Commissioner and Administrative officers, Village Councils Chairman and GBs to create a local market in their respective areas for essential commodities. He said if there is space in their village or colonies, the Village Council can take decision for a public space, for wedding or for meetings. “Every wedding should be done in your own town,” he said.
He also urged the people to change their mindset and start from Dimapur and Kohima. He further suggested the Department to take up their proposals in the District Planning and Development Board (DPDB) meetings and let the authorities decide.
Advisor, Horticulture, Mhathung Yanthan congratulated the Department for creating a beautiful park. He said horticulture is not only about fruits and vegetables but also beauty and aesthetics.
He said Green Park has an area of 30 hectares which is huge and a great asset. He urged the Department to protect and make best use of the land. He also appealed to the neighbouring villages to extend their cooperation to the department.
Stating that Green Park has 15 to 20% of water bodies, Yanthan said once it is developed it can maintain the eco system. He also said boating, rowing etc can generate revenue as well as employment. He also urged the Horticulture Department to come up with plans.
Director & Mission Director (MIDH), Dr R Elithung Lotha gave a brief note in the Green Park and explained how they could free the land from encroachment and developed the nursery and park.
Lotha apprised the Chief Minister for the need of proper fencing similiar to that of the State stadium in protecting the property of the Government while informing that the present fencing has been constructed way back in 1987- 88. He also informed on the need for renovation of the Guest House which he said was a need for hosting guests coming from outside.

Meanwhile Dr.Elithung announced that the recreational center would be open from 5 a.m. to 6 p.m. during Summer and 6 a.m. to 5 to 6 p.m. in Winter on all week days. The Department would come out with the revised rates for membership and entry fees, he informed.
Minister for Rural Development, Metsubo Jamir and NDPP President, Chingwang Konyak was also present on the occasion.
Earlier, Neiphiu Rio also planted a sapling of Magnolia (Mangnolia Grandiflora) in the recreational centre. (Page News Service)