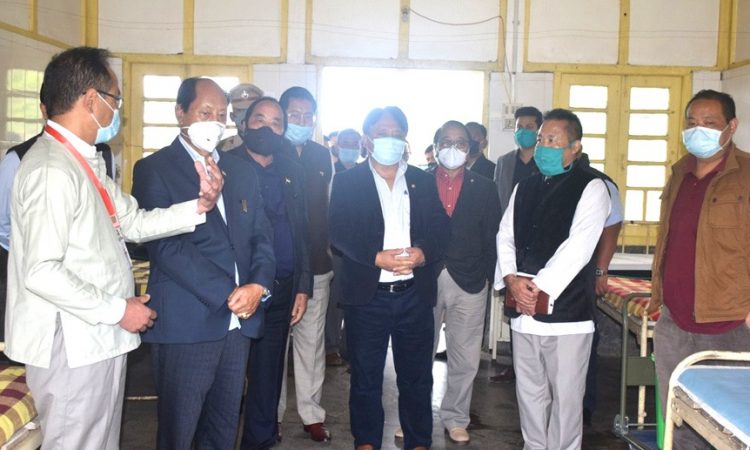 Dimapur, May 7: Chief Minister Neiphiu Rio along with Deputy Chief Minister Y. Patton visited COVID-19 Hospital Mokokchung on May 7. Chief Minister inspected the arrangement and preparedness on all round Medical and security in the District TB Hospital and Imkongliba Memorial District Hospital (IMDH) which were converted into District COVID-19 Hospital. At IMDH Rio distributed relief package (food) to the daily wage earners and labourers.
A meeting was held with officers and NGOs representing Ao Senden, Watsu Mungdang (Women organization) AKM, ABAM, MTBA and all ward president at DC Bungalow Mokokchung. Deputy Commissioner, Mokokchung Limawabang Jamir highlighted on the COVID-19 in the district.
The Chief Minister appreciated all for selfless contributions and extending co-operations in fighting the COVID-19 Pandemic till Lock down 2 stage and further expected the same response from every quarter during the extended 3rd lockdown also. We are fighting with an invisible enemy let us all put our mistake and differences behind and fight this unitedly, he said.
On relaxation of the lock down, CM said that it will be done in phased manner according to the outcome of the daily case report for our state since we were put under Green zone. He also highlighted the state economy during the lock down period which has suffered.
He appealed to all to reconstruct the state economy by going back to the land and start producing because if we fail in our economy we will not survive simply depending in central grants alone, we all must work together and rescue ourself, he said. On the stranded people’s movement the Chief Minister called upon all to follow and maintain the protocol issued by the Government.
Deputy CM, Y Patton who also spoke in the meeting appreciated the Administration and all the stake holders for their strong and unceasing efforts in fighting the pandemic in the district. He appreciated the villages and residents of border areas and also assured full security (police) in the district especially in the border areas.
Minister in charge COVID-19 Metsubo Jamir highlighted on the programmes and action taken in fighting the COVID-19 in the district.
The CM was accompanied by local elected members including TemjenImna Along, Minister for Higher Education & Technical Education, Longriniken, Advisor National Highway, Shariangin Speaker NLA and Imkong L. Imchen MLA.
Wokha:
Meanwhile, Chief Minister of Nagaland, Neiphiu Rio visited District hospital Wokha and held meeting with government officials, Lotha Hoho, Lotha Eloe Hoho and Lotha students Union today.
During the meeting held at Deputy Commissioners conference hall, Wokha the Chief Minister lauded the efforts put in by all government agencies, District Administration, Police, Doctors, nurses and all the front-line workers in combating the COVID-19 pandemic in the district and state as well. He also expressed satisfaction regarding the preparedness and arrangements made by the District Task Force after personally inspecting the designated COVID-19 hospital.
Stating that the Government is better prepared now to fight against the pandemic crisis, Rio said that it was all possible because of collective effort from all section of the society which he termed as Team Nagaland.
He further added the lockdown was also very successful in the state because of the support and co-operation extended by the Civil societies and NGOs, he also thanked all the churches and believers for the constant prayer support during such time of crisis.
Amount generated from COVID Cess will be spend only on one particular discipline that is COVID-19 with a few to improve health care facility in our State clarified the Chief Minister.
Regarding the opening/ relaxing of Wokha- Merapani border (since both Wokha and Merapani fall under Green Zone category) for transportation of essential commodities in the district proposed by Lotha Hoho the Chief Minister directed the Deputy Commissioner, Wokha to prepared a detail report for onward submission to the Home Commissioner & Chief Secretary Nagaland for further deliberation.
Lotha Hoho also apprised the Chief Minister that on inspection of the District hospital on 20th April 2020, found out that the COVID-19 district hospital does not have required doctors and medical equipment’s, for which the Lotha Hoho has requested for immediate replacement of doctors attached to Dimapur and the one who is on study leave, the Hoho also stated that the doctors are not posted as per the sanctioned strength for the district for which the Hoho appealed for redressal at the earliest. The Hoho also requested to provide basics medical equipment’s as per the requirement of the district such as X- Ray machine, Ventilators, cardiac monitors, Thermal scanners and standard PPE. The Chief Minister informed the Hoho that he will take up the matter at the Government level for deliberation at the earliest.
Deputy Commissioner, Wokha Orenthung Lotha who chaired the meeting apprised the Chief Minister about the preparedness activities undertaken by the District Task Force, Medical and police.
The Chief Minister was accompanied by Dy.C.M, Home and Minister for R&B Y. Patton, Minister, Minister for Rural Development Metsubo Jamir, Minister for Higher Education & technical Education and Tribal Affairs Temjen Imna Along. MLA Dr. Chumben Murry also attended the Meeting. (Page News Service)