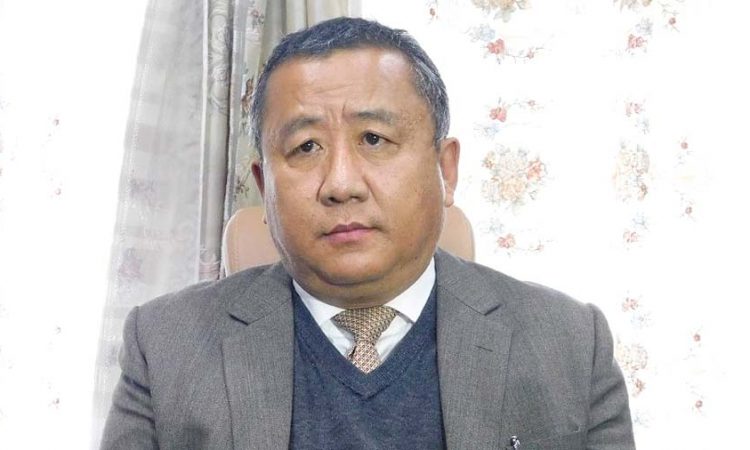 Dimapur, January 28: Nagaland Chief Secretary Temjen Toy died on Thursday evening at his residence in Kohima after a brief illness, family sources said.
He was 57 and survived by wife and four children.
Toy, a 1989-batch IAS officer, took charge as the chief secretary of Nagaland in March 2018.

He was diagnosed with a liver problem in mid-2020 and was under constant medication. He was also flown to the US for medical treatment but returned without much improvement, sources said.
Governor, DyCM condoles
Nagaland Governor RN Ravi has expressed shock and grief at the untimely demise of Temjen Toy, IAS, Chief Secretary of Nagaland today at Kohima, saying we have lost an able administrator and one of the finest human being.
“He was a warm hearted and a cheerful human being. As an administrator he was always willing to take on difficult responsibilities and made his mark as a conscientious public servant. His contribution to the people of Nagaland in various assignments will be remembered for ever,” he said in a condolence message.
Extending heartfelt condolences to the bereaved family members, the Governor prayed that Almighty God give them strength and fortitude to bear the devastating loss. He also prayed for eternal peace to the departed soul.
Dy.CM: Deputy Chief Minister and BLP leader, Y Patton has expressed grief at the untimely demise of Temjen Toy IAS, Chief Secretary, Nagaland after a brief illness.
Late Toy served the State Government in various capacities as an efficient administrator and ultimately rose to the rank of Chief Secretary. He was also responsible in bringing many administrative reforms in the state for which the State Government shall remain indebted. In his death the state has lost one of the finest breed of an administrator, and it will be very difficult to fill the vacuum created, Patton said.
The Deputy CM conveyed heartfelt condolences to the bereaved family and prayed for the departed soul to rest in eternal peace.

CM tweets condolence
I am extremely saddened at the passing away of @temjentoy, Chief Secretary of Nagaland. He was a humble, upright and dedicated government servant. His death is a huge loss for the Govt. of Nagaland & for the Nagas as a whole. Heartfelt condolences to his family. May his soul RIP