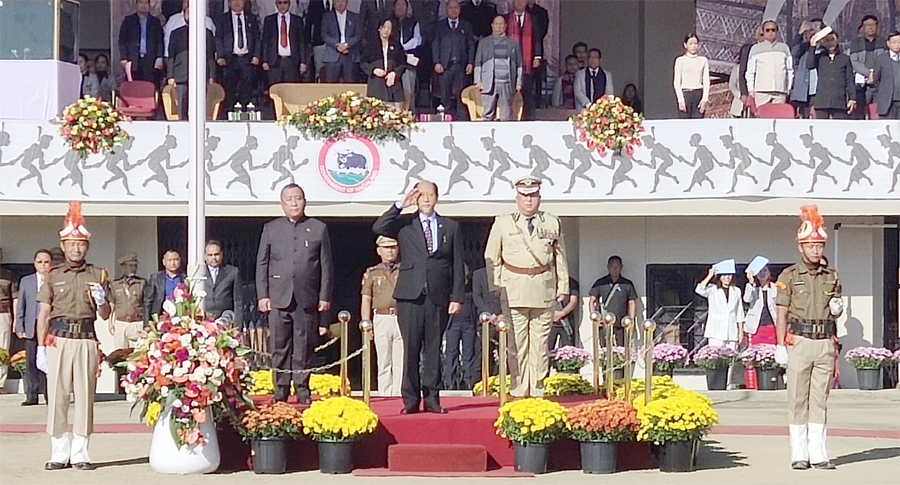 Kohima, December 1: Even as the protracted Naga political issue continues to linger between Naga negotiators and the Government of India for a final solution, Nagaland – the first state in the North East to be bifurcated from Assam in 1963, Sunday celebrated its 57th Statehood Day with pomp and gaiety.
The main celebration held at Khouchiezie (local ground) here this morning was marked by the State police, Indian Reserve Battalion, including Mahila, Special Task Force and Village Guards and traditional attire and dao (traditional machetes) taking part in march past.
The crowd was also entertained by band display by combined team of Mahila Pipe Band, NAP Pipe Band, Home Guards & Civil Defense Pipe Band, Police Training School Pipe Band, 10th Indian Reserve Brass Band and 4th NAP Brass Band.
Drill display with arms by 15 Indian Reserve (Mahila) platoon attracted the audience with rounds of cheers while 1060 students from 12 schools in Kohima sang the popular song God Bless Nagaland.
Nagaland Chief Minister Neiphiu Rio and Deputy Chief Minister Y Patton along with galaxy of Cabinet Ministers and Advisors, Chief Secretary Temjen Toy, top police and paramilitary officers were present during the celebration.
Speaking from the podium of Khouchiezie, the ground where the then President of India, Dr Sarvepalli Radhakrishnan declared the Nagaland as the 16th state of the Union in 1963, Chief Minister Neiphiu Rio said “we are also reminded of the momentous events and circumstances of the past which led to the formation of the State”.
“We are filled with reverence and gratefulness to all the founding members and the visionary leaders at that time who by their sacrifices and resoluteness brought into reality the State of Nagaland,” he said.
Stating that the quest for a final solution to the Naga political issue continues till today, he said negotiations between the various Naga Political Groups and the Government of India have concluded. “We (Nagas) are poised on the verge of history being made, as we could be very close to the final solution,” he said.
On behalf of the State Government, the Chief Minister conveyed deep appreciation to all the negotiating parties for showing magnanimity, a spirit of understanding and foresightedness for achieving breakthrough in the talks and for being able to reach common ground on all the issues that were being negotiated for long.
The long-awaited solution of the Naga political issue seems to be within grasp and that fills us with eager anticipation and happiness, he said, adding that this should also make the Nagas realize the huge responsibility that now lies bestowed upon all for ensuring that every step taken by them is with greatest honesty and in the right direction so that what has been cherished and yearned for so long by Naga people becomes a reality without any further delay.
As Nagas continue with their pursuit for the final settlement, Rio said “the Government remains steadfast in its commitment for ensuring progress and development for the people of the State in all spheres”.
He asserted that the Government continues paying its utmost attention to one of the most crucial infrastructural need of the State, which is increasing road coverage, power & health sectors and human resource development.
Maintaining that agriculture continues to be important for the Nagas as it is the main occupation of people of the State, he said the construction work of organic air conditioned market at North East Agri-Expo site in Dimapur is in full swing which will help in further facilitating marketing opportunities to the farmers.
Under PM-KISAN, more than 1,42,603 small and marginal farmer names have been uploaded and an amount of about Rs 54.60 crores have been directly deposited to the individual accounts of the farmers, he said.
The Government has been promoting organic farming and agriculture to double the livelihood incomes of the farmers, he said.
A constant endeavour of the State Government has been towards e-governance in all the fields as this not only brings transparency, improves governance but also promotes ease of living, he said while also reiterating that the launching of MyGov Nagaland portal, for the State of Nagaland is an innovative IT platform to build partnership between citizens and Government with the help of technology for growth and development of the state.
The beautiful landscape of Nagaland and the rich and vibrant culture of the Naga people makes Nagaland one of the most interesting tourist destinations of the country, he said.
“We are continuously working towards improving and scaling up the tourism sector in the State,” he said.
“As we keep making progress in all the spheres of development, we should be always aware that many of the developmental efforts become possible only with peace and good law and order situation in the State,” Rio said.
In this the Chief Minister shared that on November 22 last, Nagaland has been adjudged the best performing small State in law and order by the India Today Group State of States survey for the second consecutive year. He mentioned that the State also got adjudged as this year’s most improved small State in entrepreneurship and cleanliness in the same survey.
The State Government remains committed for continued efforts in every direction for ensuring all round growth, he said, adding that a comparison of most of the developmental indices shows that Nagaland has definitely made tremendous progress in all fields.
On the auspicious day, the Chief Minister called upon the citizens of the State to once again resolve to rededicate themselves for working steadfastly towards making Nagaland one of the most admired and developed states of the country.
Meanwhile, as the day also coincided with the inauguration of the much hyped 10-day festival of festivals – Hornbill Festival, the Chief Minister welcomed the tourists from within and outside the country.
He hoped that they take back fond memories and proper insight of the Naga heritage, tradition and culture. (Page News Service)