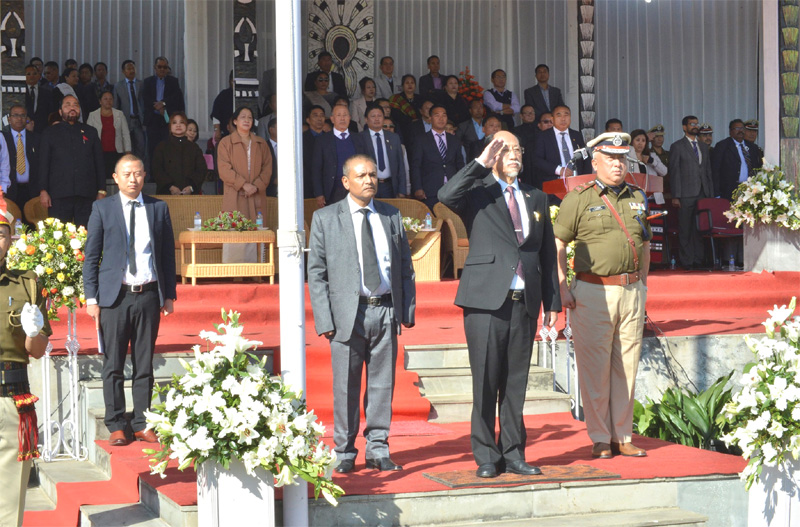 Nagaland Chief Minister, Neiphiu Rio taking the salute from March Past contingents during the 55th Statehood Day celebration of Nagaland at Civil Secretariat, Kohima on December 1, 2018.

We still have a long road ahead of us: Rio

Kohima, December 1: Nagaland on Saturday celebrated 55th statehood day with cultural regale and also parade, drill and arms handling show by police forces and air display by India Air Force.
This is the first such exclusive celebration of the Statehood Day after the commencement of Hornbill Festival celebrations since 2000.
On this day in 1963, Dr S Radhakrishnan, President of India, inaugurated Nagaland as the 16th State of the Indian Union.
In his address during the colourful celebration at Secretariat Plaza here, Chief Minister Neiphiu Rio remembered the sacrifice and struggle of the founding fathers who conceptualized the idea of Naga nationalism and sovereignty.
Maintaining that it is important to remember the history of Statehood and the struggle and the sacrifices of our pioneers, Rio said the British created the Naga Hills District in 1866 with headquarters at Samaguting (present day Chumukedima). The headquarters were shifted to Wokha in 1876 and then to Kohima in 1878, he recalled adding that while Wokha continued to be a Sub-Division, this was shifted to Mokokchung in 1889. Later Tuensang was included as part of Naga Hills Tuensang Area (NHTA), he said. The resistance of Nagas to be included under British Rule began 100 years ago, when the Naga Club was formed in 1918, he said, adding that the Naga Club submitted a Memorandum to the Simon Commission on January 10, 1929 demanding the exclusion of Nagas from the proposed constitutional reforms in British India.
This marked the beginning of the political movement leading to the Naga Plebiscite of 1951 and the deployment of armed forces to contain the struggle which led to loss of innumerable lives, Rio said.

The first attempt to politically resolve the issue was made through the 16 Point Agreement of 1960, signed between the Government of India and the Naga People’s Convention. The Interim Body of Nagaland was inaugurated on 18th February, 1961, by General Shrinagesh, the then Governor of Assam. This body with an Executive Council of five members was to advise and assist the Governor in the administration of Nagaland for implementation of the 16-point Agreement of 1960 signed between the Government of India and the Naga People’s Council.
Subsequently, on 28th August, 1962, the Constitution (Thirteenth Amendment) Act, Bill No. 7 of 1962 was passed by the Parliament and the President gave assent to the State of Nagaland Bill, 1962, on 4th September, 1962, for the creation of Nagaland as the Sixteenth State of the Indian Union. Nagas were given special status under Article 371 (A) of the Constitution of India. On the morning of 1st December, 1963, Dr S Radhakrishnan, the President of India, inaugurated Nagaland as the 16th State of the Indian Union, Rio stated.
Nonetheless, Rio lamented that even after Statehood, the armed conflict between the Naga groups forces continued, including clashes among the various Naga factions, resulting in the loss of many precious lives.
The Government of India also recognized Naga history as “unique” and that the unresolved Naga issue was a political issue which needed settlement.
Today, he said Nagas stand at the threshold of peace; and the overarching desire focus on development and a better future for our youth has led to ceasefire and peace negotiations between the NSCN and later with the other Naga National Political Groups (NNPGs) and Government of India have been going on for the last 21 years.
On behalf of the Naga people, Rio placed on record the Government’s appreciation to all the NNPGs who are engaged in peace talks as well as those who are coming forward to ensure that peace prevails in the society.
The CM said that the yearning for lasting peace and an all-inclusive honourable, acceptable and an early settlement to the vexed Naga political issue is the top priority of his Government.
Rio said all-round development can come when there is lasting peace.
The People’s Democratic Alliance (PDA) Government is committed to facilitate for an early resolution of the Indo Naga political issue through a negotiated agreement that honours the unique history the rights and identity of the Nagas, he said.
Rio also reiterated that his Government will pave the way for an alternative arrangement that may be required for implementation of any such political agreement.
“While the quest for a final settlement continues, we are also committed to ensure good governance and development in the State”, he said.
The CM said that one of the top priorities of the Government has been to ensure better roads and it has taken up repair of all major roads in all districts.
Rural Nagaland has been declared Open Defecation Free on October 2, 2018 ahead of the National target, he said adding that very soon turban Nagaland will also be declared ODF.
The Government of Nagaland will leave no stone unturned to deliver better services to the people because we have been elected to power on the theme “change is coming”, Rio stated.
“We still have a long road ahead of us. We need to set up more infrastructural requirements and maintain them”, he said while calling upon all the people of Nagaland to come forward and join hands with the Government so that we can march together towards all-round development.
Altogether, seven contingents participated at the parade including DEF Kohima, 4th NAP Bn, Village Guards Platoon I and II and IR Platoon I, II & III, Band display by Police Brass Band, Police Pipe Band, VG Brass Band. The spectacular and magnificent Drill display by 9 IR Mahilla Bn and Weapons Handling by Nagaland Police was followed by petal dropping by Para Motor, Corporal, Vishal Kumar and spectacular sky diving by Indian Air Force.
Nagaland at 55, a video presentation was made by Directorate of Information & Public Relations.
Seventeen tribes gave a glimpse of their unique cultural performances. The song “A ra Kezivi” by Cantamus Choir was sung along with students from Baptist High, Bethel Higher Secondary, Northfield and G. Rio Schools. (Page News Service)