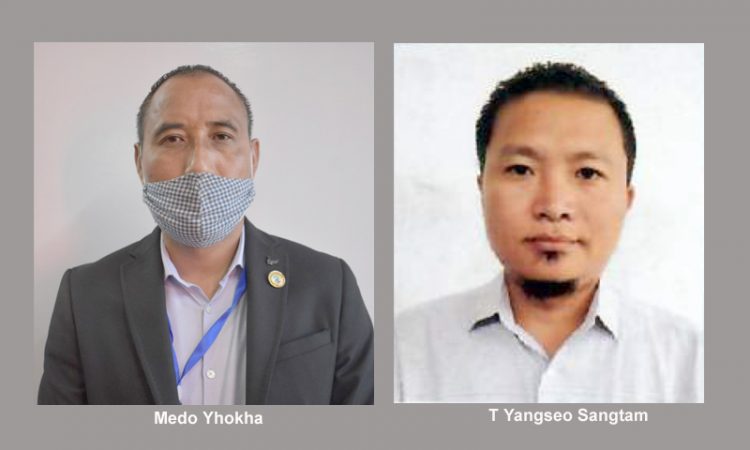 The bye-elections were held on November 3 following the demise of sittings ruling MLA and then Speaker Vikho-o Yhoshu from Southern Angami seat, under Kohima district and Opposition MLA T Torechu from Pungro-Kiphire seat, under Kiphire district.
In the Southern Angami-I Assembly segment, Yhokha polled 4,773 votes defeating his nearest rival Independent candidate Seyievilie Peter Zashumo by 598 votes, who got 4175 votes. NPF nominee Kikovi Kirha got 2575 votes, said Chief Electoral Officer Abhijit Sinha.
Altogether 88 votes went to None of the Above (NOTA) while 38 postal ballots were rejected, he said.
Interacting with media persons after winning the by-poll, a jubilant Yhokha, a first-timer in electoral politics, thanked the Almighty for “taking through a stiff fight”.
He reaffirmed to fulfill with priority the commitment and assurance given to the grassroots and the 6 villages and 1 municipal area under the constituency.
“I will do my utmost best to fulfill the promises and live up to the expectations of the people,” Yhokha said while acknowledging the verdict of the people.
Medo Yhokha (43) is the son of Zelhouvi Yhokha and hails from Kigwema village in Southern Angami region of Kohima district.
He has worked as a former president Angami Students’ Union and Angami Youth Organisation, press and information secretary of Angami Public Organisation and chairman of Inner Line Regulation Committee of Naga Students’ Federation.
Yhokha was the PRO of the then Speaker Vikho-o Yhoshu till his demise in December 2020.
In Pungro-Kiphire, the ruling People’s Democratic Alliance (PDA) suffered a debacle as its consensus BJP nominee Lirimong Sangtam stood in third position.
T Yangseo Sangtam won the seat by a margin of 1,527 votes. He got 8,747 votes comfortably defeating his nearest rival S Kiusumew Yimchunger, another Independent candidate in fray, who polled 7,220 votes, declared Sinha.
BJP’s Lirimong got 5,664 votes while the third Independent K Shellumthong Yimchuger got 5,388 votes and Indian National Congress nominee Khaseo Anar got 347 votes.
Yangseo is 39 years old and the son of Tsathroangli. He hails from Kiphire village.
Sources close to Yangseo said that he is likely to extend support to the ruling PDA. However, during the election campaign ruling BJP and NDPP officials had declared that PDA is comfortable and would not include non-Party elected members into the fold.
Yangseo could not be contacted for the comments at the time of filing this report.
He said that Congress candidate Anar is the only candidate who lost the security deposit for not being able to secure 1/6th of the valid votes polled.
The CEO also officially declared the conclusion of the bye-election process in the State.
After today’s by-poll results the party strength of the 60 member State Assembly comprises of 33 ruling members including 20 NDPP, 12 BJP and supported by 1 Independent. Opposition NPF has 25 MLAs. Decision of the fresh Independent MLA Yangseo is not known and another seat 51-Noksen Assembly constituency, under Tuensang district, is vacant following the demise of ruling NDPP Minister C M Chang on October 12.
(Page News Service)