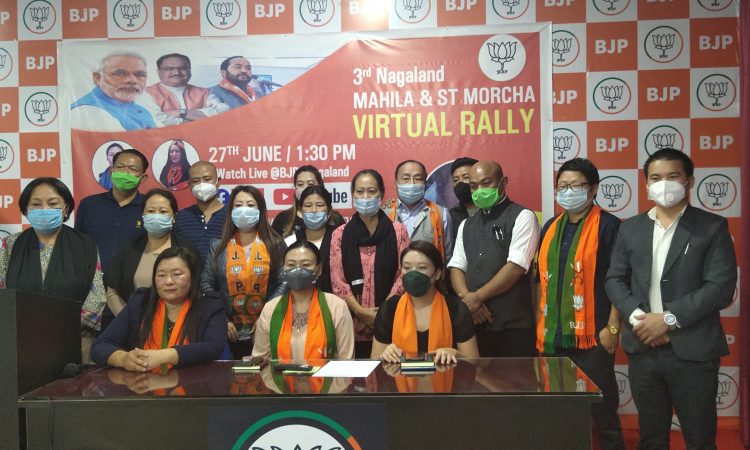 Kohima, June 27: The Bharatiya Janata Party Nagaland 3rd virtual rally for State Mahila and Schedule Tribe (ST) Morchas in commemoration of one year of Modi 2.0 government was held today at BJP Headquarter Kohima with National BJP Mahila Morcha vice president, A Sharda Devi addressing the gathering through video conferencing.
In her address, Sharda Devi encouraged the state mahila morcha to propagate all the schemes of the Central government formulated during the past one year of Modi 2.0 government. She said that among others the various welfare schemes for women and farmers should be highlighted through the virtual rallies.
She also encouraged the state BJP mahila leaders saying that amidst the COVID-19 pandemic, they should not deter to work for the welfare of the people including distribution of face cover and sanitizer.
She said that the State BJP Mahila Morcha should initiate making face covers for free distribution among the general people.
Saying that despite the COVID-19 pandemic agricultural activities will have to be continued following all protocols, Devi asked them to highlight the Kishan Samman Nidhi scheme for the welfare of women farmers.
She further asked them to be a bridge between the government and the common people.
Speaking on the occasion Nagaland State BJP Mahila Morcha president, Phangnon Konyak said the Central government under the dynamic leadership of Prime Minister, Narendra Modi has lived up to its promises to deliver good governance and sabka saath, sabka vikas, sabka vishwas.
“As we commemorate one year of Modi 2.0 we acknowledge the success of doing away with triple talaaq for our women, Citizenship Amendment Act and the positive, timely proactive steps taken by the BJP government in the centre in the face of this pandemic,” she said.
She also said that to stabilize the Indian economy alongside safeguarding the interests of the needy and to make 1.3 billion Indians economically self reliant, the plan for Atmanirbhar Bharat has been laid.
A social and economic comprehensive package of Rs. 20 lakh crore for the benefit of the whole spectrum of society, including women has been launched, she said while also highlighting Women Jan Dhan Account holders getting Rs.500 each for 3 months, increase of MNREGA wage, Financial help of Rs.1000 for poor, needy senior citizens, poor widows, Limit of collateral free lending to be increased from Rs.10 lakhs to 20 lakhs for women SHGs.
She also said that the central government has put in migrant laborers not covered under National Food Security Act or without ration cards eligible for food grains for May and June this year, free of cost.
She also highlighted on easy credit access for street vendors covering both urban and rural areas while also dwelling on 6000 cr Compensatory Afforestation Management & Planning Authority to create job opportunities in urban, semi-urban and rural areas benefiting the tribals.
The State BJP Mahila President said the post-COVID-19 world is expected to be more introspective and thus, it is the perfect time for India to identify its own manufacturing capabilities and use this crisis as an opportunity to scale up and become a manufacturing hub.
Also, during this pandemic, the Nagaland State Mahila Morcha has responded by reaching out to the people of our state by distributing masks and dry rations to the needy, she said.
She also said that with the active support of the State President, the Mahila Morcha started the ‘Mask for all’ campaign in March this year till date wherein more than 15,000 masks have been distributed stitched and distributed, led by the Mahila Morcha District Presidents.
State BJP ST Morcha president Wanphong Konyak in her address said that in Nagaland Schedule Tribe consists of 89% of the population.
The tribals were long deprived of basic amenities while facilities could not reach the villages, because of which the BJP government has taken up several important steps and curved out the ST Morcha, she said.
Asserting that the BJP government is committed to the welfare of the villagers, poor, farmers, dalits and the deprived, she said maximum projects of both the centre and state are being done for these sectors.
She also highlighted some of the activities carried out by the State BJP ST Morcha during this pandemic.
Chaired by Media Officer to State BJP President, Sapralu Nyekha the virtual rally commenced with prayer by BJP Mahila vice president P Kavili Achumi while spokesperson & PRO to State BJP President, Samuel Sumi tendered the vote of thanks. (Page News Service)