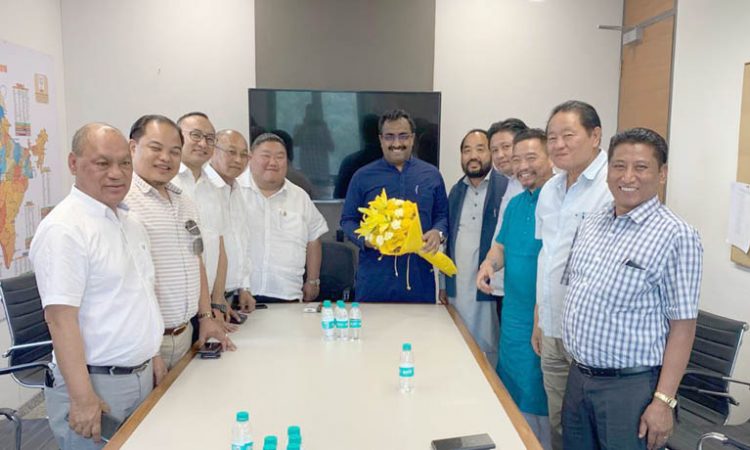 Dimapur, May 22: A delegation of BJP Legislators led by Deputy Chief Minister and BJP Leaders, Nagaland, Y Patton and Minister for Higher and Technical Education and President, BJP Nagaland unit Temjen Imna Along accompanied by a host of BJP Legislators, Jacob Zhimomi, Kashiho Sangtam, Dr. Longrineken, Mhonlumo Kikon, Tovihoto Ayemi, Kasheto Kinimi, Khehovi Yepthomi and H Haying met Union Home Minister, Rajnath Singhji at his official Residence, New Delhi today.
Upbeat with the indications shown by the exit polls that the BJP led NDA under the dynamic and visionary leadership of Prime Minister, Narendra Modi and National BJP president Amit Shah would be storming back to power with a landslide victory, the delegation thanked and congratulated the National BJP Leaders of all ranks and files, BJP Karyartas in the grassroots level for their relentless effort and hard work in the just concluded Lok Sabha General Elections in the country.
The delegation also apprised Rajnath that PDA Government in Nagaland under the Chief Minister Neiphiu Rio is very comfortable with a commitment to deliver maximum goods and services to the people and in this regard the Union Home Minister was requested to extend help in every possible way to the Government of Nagaland even in their next dispensation.
The BJP delegation also reiterated and requested Union Home Minister once again to thoroughly investigate the arrest of gangster Vijay Farmana and his associates by the Delhi Police at Lucknow and subsequent revelation of a plot to kill Nagaland based politician apart from other related cases and for which the Union Home Minister assured that the case will be taken with all seriousness, go down deep to the bottom and will leave no stone unturned until their diabolical designs are unearthed.
Nagaland Ministers, Pangnyu Phom and Paiwang Konyak respectively would joing the Nagaland BJP delegation in Delhi by tomorrow.
Later, the delegation also gave courtesy calls to National General Secretary, Ramlal and Ram Mahdav, North East General Secretary and discussed matters pertaining to the party and the people in general.
(Page News Service)