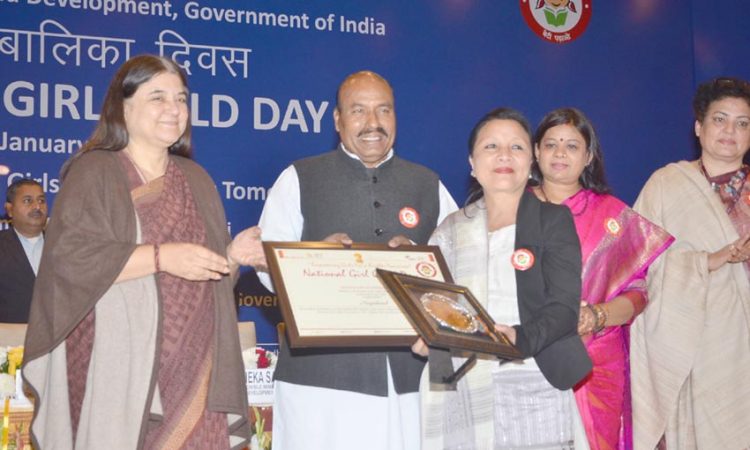 Dimapur, January 24: Nagaland State has been awarded among the top five States/UTs for excellent performance in Beti Bachao Beti Padhao (BBBP) under State competition category in recognition of the “Over all support, guidance, monitoring and achieving the targets of BBBP” during the National Girl Child Day celebration on January 24 at New Delhi.
This is the first time that States and UTs are being awarded for their good performances under BBBP.
The award was given by Union Minister of Women and Child Development, Maneka Gandhi and was received by Sarah R Ritse, Secretary of Social Welfare Department, Nagaland.
Speaking on the occasion from New Delhi, Sarah Ritse said, “I am proud of the team work that the State Resource Centre for Women (SRCW) as the implementing agency for BBBP under the Department of Social Welfare has done. It gives me immense pleasure and pride to receive this award on behalf of the State and on behalf of the women and girl child. I hope this will be a moral boost not just for the Department, but for our State as well, to work much harder for the upliftment of our women and children. This award is the result of the support rendered to team SRCW by the Governor, the Chief Minister, Chief Secretary and the whole community.”
The State Resource Centre for Women (SRCW), Nodal Agency Nagaland State Social Welfare Board, under Department of Social Welfare is the implementing agency for BBBP. SRCW’s role as the PMU is to implement the BBBP state level activities and to provide overall guidance and support to all the District administrations implementing the BBBP scheme.
The District Administration of Wokha has also been awarded amongst 25 districts for its good performance on BBBP in the category – Effective Community Engagement.
Dr Manazir Jeelani Samoon, IAS, DC Wokha received the award on behalf of the district. Erenbeni P. Lotha, one of the local champions for BBBP from Wokha district was invited to speak on her experiences as a local champion along with three other local champions from across the country. (Page News Service)