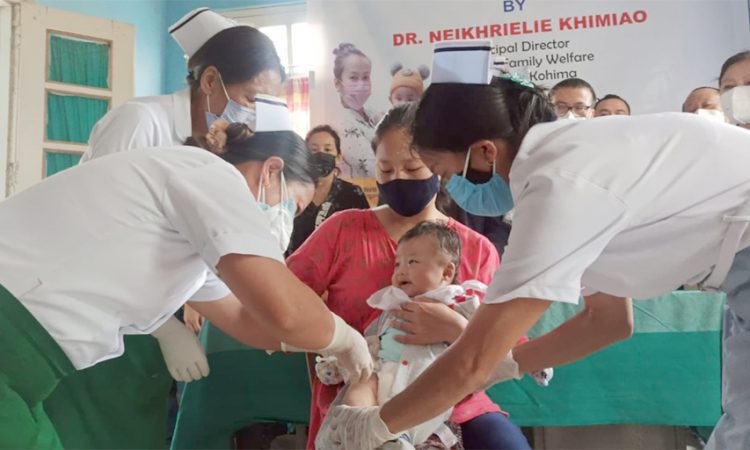 Following the official launch of the vaccine, it will be administered to children below the age of 5 in all districts on the same day, informed Dr. Ritu Thur.
Briefly highlighting on the vaccine, Principal Director of H&FW said that the new vaccine (PCV) is to provide protection to a child against Pneumonia and Meningitis caused by a bacterium called pneumococcus.
Following the launch of the PCV in Himachal Pradesh, Rajasthan, Uttar Pradesh, Madhya Pradesh and Bihar back in the year 2017, the vaccine was introduced in Arunachal Pradesh, Jammu & Kashmir, Manipur, Meghalaya,, Mizoram, Sikkim, and Tripura on June 7, followed by the launch at Nagaland on June 11, Dr. Thur added.
Vaccinating a child with PCV will prevent disease and deaths due to pneumococcal pneumonia. Currently, the vaccine is available in liquid form which is injectable, informed Dr. Thur. It was further mentioned by the State Immunization Officer that the vaccine will be administered in 3 doses with the first dose at 1.5 months, the second at 3.5 months, and the booster dose within 9 months.
Replying to a series of queries on PCV, Dr. Thur said that Pneumococcal Conjugate Vaccine is being introduced by the Government of India, free of cost, under the Universal Immunization Programme (UIP) in order to protect a child against pneumococcal disease.
Pneumococcal disease is a group of disease caused by a bacterium called “streptococcus pneumonia”, which is an acute respiratory infection characterized by cough, difficulty in breathing and rapid breathing, he said. It spreads from person to person through droplets from coughing and sneezing, he added.

Dr. Thur also pointed out that the disease is a major public health problem. “The disease stands second in terms of morbidity: mortality under the age group of 5 years. There are 53,300 deaths due to pneumococcal pneumonia, informed Dr. Thur.
The Ministry of Health & Family Welfare, Government of India, has notified that Pneumococcal disease can lead to hospitalization or even death in some cases. It can lead to a huge financial burden on the family. Pneumococcus is the leading cause of bacterial pneumonia which is the major cause of death in children under 5 years of age, the Ministry said.
PCV has been proven to be an effective tool to protect children from pneumococcal pneumonia, which is the leading cause of pneumonia in children and PCV is provided free of cost under routine immunization across the country, the Ministry added.
For more information on Pneumococcal Conjugate Vaccine (PCV), citizens are asked to contact the nearest ASHA or ANM.
Dimapur: Chief Medical Officer Dimapur, Dr. I,. Moatemjen launched Pneumococcal Conjugate Vaccine (PCV) in Dimapur District on June 11.
Dr Rebecca, District Programme Officer for UIP/RCH, informed that PCV is being introduced in routine immunization under Universal Immunization Programme (UIP) to protect children against pneumococcal diseases caused by a bacterium called pneumococcus.
Pneumococcal infection can lead to serious invasive diseases such as Meningitis, Pneumonia, and Septicemia, as well as milder but more common illness such as Sinusitis and Otitis Media.

The risk of serious pneumococcal disease is highest in the first year of life and remains high throughout the first 24 months of life. PCV vaccination will prevent diseases and deaths due to pneumococcal infection in children and also reduce the risk of pneumococcal disease among others in the community, she said.
PCV is an expensive vaccine in the private sector, however under UIP, PCV will be given free of cost to all eligible infants in the fixed and outreach immunization sessions. PCV will be given to infants in 3 doses – at 6 weeks, 14 weeks, and 9 months of age.
In India, under UIP, PCV has already been introduced in a phased manner since 2017 in 5 States. The PCV vaccine is safe and has been well-accepted. Severe adverse reactions attributable to the vaccine are extremely rare. Mild side effects such as pain at the injection site and fever can occur.
All health workers in the district have been trained to administer the PCV under routine immunization.
Zunheboto: Zunheboto along with the rest of the district launched the Pneumoccocal Conjugate Vaccine (PCV) at Khuwaboto SC on June 11. Dr K Akaho Sema, Deputy CMO, Zunheboto, gave a short keynote address and launched the PCV vaccine.

Wokha: In Wokha, it was launched at Dr. Motsuo Memorial District Hospital.
Chief Medical Officer, Wokha, Dr. CW Tungoe informed that the district is targeting to vaccinate 1,249 beneficiaries annually and the vaccine has already been distributed to all the healthcare centres for intensive immunization.
(Page News Service)