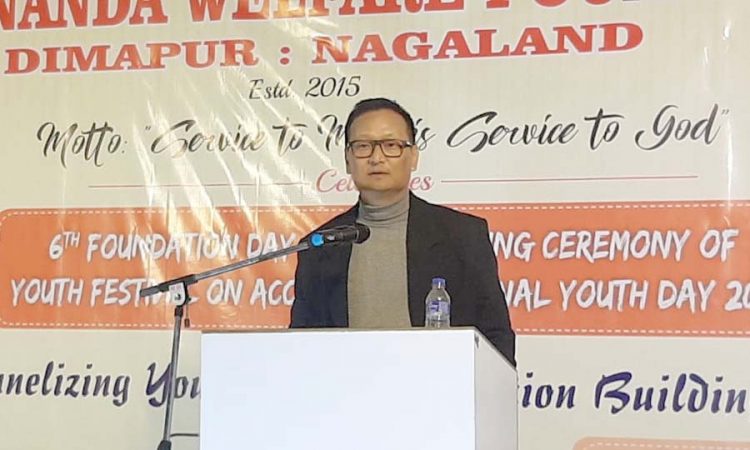 DIMAPUR, JANUARY 17: The president of National People’s Party (NPP) Nagaland unit, Dr. Andrew Ahoto Sema, on Sunday called Nagaland a hub of corruption and laid the blame squarely at the leadership of the state.

Once an ally of the ruling PDA government, the NPP in Nagaland pulled out of the alliance in 2019 after two of its legislators merged with NDPP, the party to which Chief Minister Neiphiu Rio belongs.
Speaking as the special guest at the celebration of National Youth Day, organized by Vivekananda Welfare Foundation here at Durga Mandir in Dimapur, Sema said that no political party or religion is bad, but it is the leadership or representative that gives them a bad name and people should vote for good leadership.
Calling for the separation of politics from religion-which, according to him, has become difficult to differentiate in the country-Sema said politics and religion must go hand in hand but not mix. He observed that politics has now become a platform people use for selfish gains instead of serving others and religion has been turned into a space for ‘man-made propagation’.
Stating that NPP has the appearance of a regional party but is one of the 8 national parties in the country, he claimed that with 25 MPs, the party has the power to move the country and there have been times in Indian history where the country had prime ministers from parties that had less than 25 MPs.
Referring to Swami Vivekananda, Sema said that he is the perfect example for the youth and lauded VWF for its service towards the society. He cautioned that while the country has the fortune of having 65% population under the age of 35 years, there will be good as well as bad aspects of it as the greater youth populace will create a highly competitive society, particularly because there are not enough skilled persons.
‘Lack of religious pluralism’
Guest of honour, Fr. Dr. CP Anto, director of Peace Channel and principal of NEISSR, said that VWF has proved itself to be a great philanthropic organisation during the pandemic and made differences in the lives of the people.
Anto said that Swami Vivekananda is ‘absolutely’ relevant even today’, not only to the youths but also to the children, men, women and people of all profession.
He called Vivekananda a spiritual giant and someone who inspired him personally.
He called for a universal brotherhood, citing that Vivekananda had propagated the principles of tolerance, acceptance and vasudhaiva kutumbakam, present in the Gita, to all.
Anto lamented that religion has now become a street affair and everyone is threatened by the lack of religious pluralism.
He said that people everywhere are the same but external differences are leading to conflicts. He asked people to move from ‘micro-identity’ and strive to attain ‘universal identity’, like Martin Luther asked people to be.
Anto encouraged the gathering to embrace the teachings of Vivekananda and move forward in unity, becoming inspiration to others.

He asserted that Nagaland has become a model state with no religious conflicts, and other states should learn from it.
He encouraged the parents to understand the youth and love them unconditionally. At the same time, he asked the youth to understand that while their parents might not be tech savvy, they have vast experiences.
He urged the gathering to let love, forgiveness, and compassion be the centre of their lives. (Page News Service)