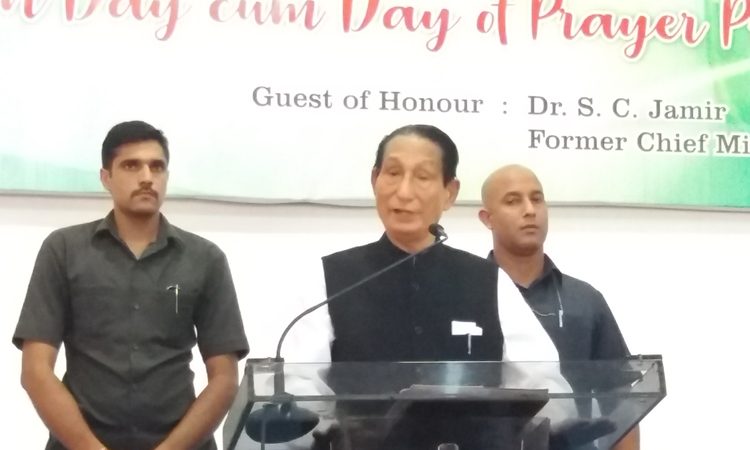 Dimapur, August 19: Former Governor of Odisha and former Chief Minister of Nagaland, Dr S C Jamir today said that Naga youths have the power, energy and enthusiasm to bring a positive change in the State.
“You have the strength and energy to reinvent, redesign and reform for a united, peaceful, progressive and prosperous Nagaland,” he said while addressing the students of Discipleship Bible College. “We have to rely on our own strength and capacity for a better future,” he said.
Calling upon the students to take all challenges as opportunities for tomorrow, Jamir reminded the students that they are living in a fast changing world. He said Nagaland can no longer live in isolation but move along with the rest of the country.
“We are living in an age of knowledge. Knowledge changes very fast and the rate of change will further accelerate the future,” he said, adding this self-propelling technological progress is altering the essential daily tools one needs in their work life.
He said people have to be fully equipped with the latest available tools to progress and march along with the rest of the country.
Jamir lamented that in Nagaland people are still talking about the past history. “It is a rarity that people talk about the present and future,” he said.
He said the past has gone and what remains is “today” and urged the students to make use of it. “Be prepared for today as today is designed for tomorrow. Tomorrow belongs to you,” he told the students.
Jamir also reminded the students that they are in a world of stiff competition in every field and said unless he/she excels there is no place for them. He said they can excel only through hard work and dedication.
Citing the example of Israel which has survived even though it is surrounded by big countries, he said this has been possible because Israel has the will to survive. He called upon the younger generations to imbibe the spirit of Israel.
He said if three attributes are combined together, there is no reasons why Nagaland cannot excel. According to him, one should have the “will to survive, will to excel and will to compete.”
Stating that today everyone is in knowledge economy, he said knowledge is power and it is wealth. “If Naga people can make themselves indispensable, there is no reason Nagas cannot progress,” he added. “Today knowledge and information revolution has changed many priorities,” he said.
He reminded that in the past people used to talk about natural resources as the foundation for economic development, but today it is knowledge which is the development matrix. He asked the students to change their attitude, vision and lifestyle and adapt with the changing world.
Citing examples from his own generation, Jamir said, “You live in a time where almost everything you do, you do it by the press of a button, whereas, our generation lived in a time when a full shirt was a dream for many and radio set was a luxury.”
Jamir further said that many forces are working in Nagaland, adding violence, materialism and many other “isms” are knocking at the door. He said the most astounding picture of Nagaland today is replication of both the Tower of Babel and the Broken Wall of Jerusalem.
Explaining the Tower of Babel in Naga politics, he said there are so many groups speaking different languages and are at loggerheads. He said the walls of Nagaland are in complete devastation. Wall symbolizes separation, security, strength and salvation from enemy’s encroachment, he reminded.
He called upon the Naga people to rise up for a united, peaceful, prosperous Nagaland by burying violence once and for all.
Discipleship Bible College today celebrated its 38th Foundation Day cum Day of Prayer. (Page News Service)