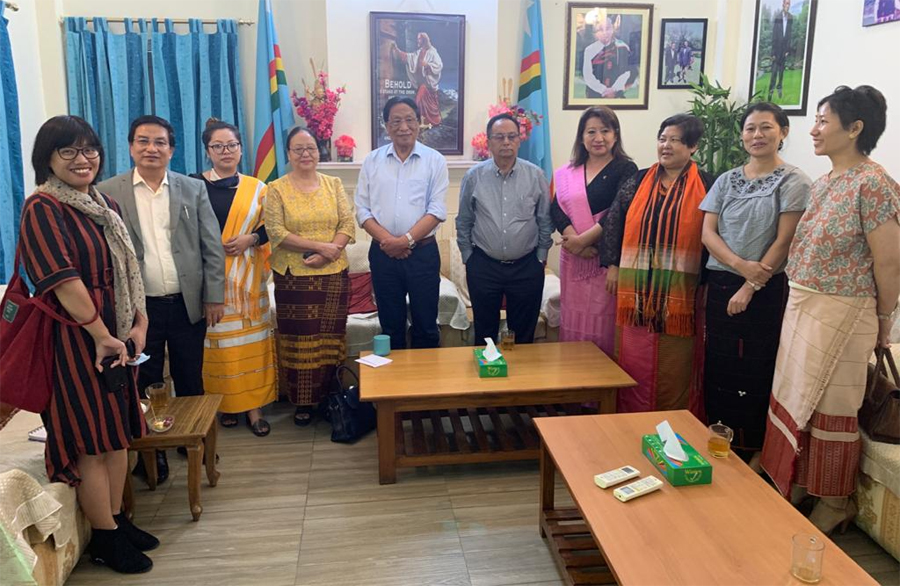 Dimapur, September 20: A 7-member Naga  women peace  delegation consisting of the Naga Mothers Association (NMA), Naga Women Union Manipur (NMUM), women representatives from Rengma Hills, Assam and Naga tribes  of Arunachal held a meeting with the NSCN (IM) general secretary, Th Muivah, NSCN (IM) Chairman, Q Tuccu, Vice Chairman, Tongmeth and other top leaders of the Collective Leadership in New Delhi on Saturday and apprised them about the grave concerns of all Nagas at this crucial junction and the call for an early inclusive peaceful settlement.

The women delegation was supported by the Global Naga Forum.

The delegation appealed to the NSCN (IM) leadership for an early, inclusive settlement for peace, recognition of Naga rights and history in all Naga areas and shared the impact of armed conflict on vulnerable sections of the communities, particularly it’s women and younger generation.

The speakers from the women delegation were Prof. Rosemary Dzuvichu, Advisor, NMA who also apprised the Leadership on the Global Naga Forum that consists of Nagas from all walks of life committed to the Naga cause ,leaders of civil organizations academics, professionals including the Naga diaspora and formed to amplify the history of the Naga story and foster unity and better understanding among Nagas.

Muivah briefly narrated the history of peace dialogues with the Government of India over the years and the demand that the Naga flag and working Constitution that has been agreed upon, which must  be included in the settlement.

He also appreciated the courage and strength of Naga women in protecting Naga rights and acknowledge their role as peace makers.

Other speakers included Rtd.Gen VS Atem, Rh. Raising and others from the Collective Leadership.