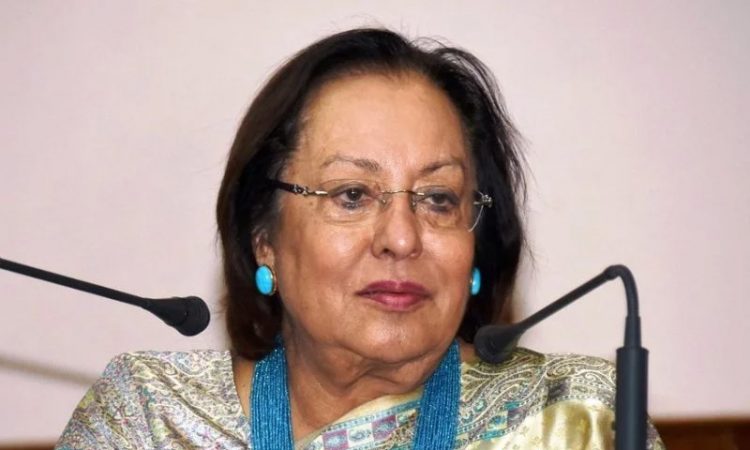 Imphal, November 1: Manipur Governor Dr Najma Heptulla Friday exhorted that differences should be resolved through talks and negotiations rather than resorting to violence including bandhs and blockades.
Addressing a gathering at ‘Chavang Kut’ festival at Imphal’s 1st MR ground, Heptulla said, “We, the people of Manipur, as responsible citizens, should ensure that we settle our differences through talks and negotiations, and not resort to violence, including bandhs and blockades.” She said the myriad of problems created between communities challenging the age-old tradition of peaceful co-existence has widened rather than being narrowed. As a result, the growth rate has been hampered despite the state’s huge potential, and the new conflicts will continue to raise its ugly head in the future, she observed.
She asserted that emotional integration cannot be achieved in a single day, but the process should be initiated so that the people can build on it. “Let this traditional festival spread the message of peaceful co-existence for a better Manipur,” she appealed.
‘Chavang Kut’ is an annual post-harvest festival of the Chin-Kuki-Mizo tribe celebrated across the northeastern states including Manipur
Meanwhile, Coordinating Committee on Manipur Integrity (COCOMI) has demanded that the terms and conditions of the just-concluded talks with Naga groups must be made public by November 4.
Sunil Karam, convener COCOMI, said, “We need to know the conditions of the talks as the government has claimed that stakeholders will be consulted before the pact is sealed, and based on the negotiated terms, we will also take our final and major step.”
He further warned of an intense form of agitations if the conditions harm the existing territorial and administrative set up of Manipur. “We welcome the peace process, but the conditions need to be disclosed to the people. The people of Manipur are still apprehensive whether the negotiation will be detrimental for them,” said Karam. He further appealed to the people to continue with “public alert” meetings and sit-in demonstrations against any anti-Manipur policy.
COCOMI, a conglomerate of major civil organisations, formed to spearhead protests against the disintegration of Manipur, had called for a cease-work protest on Friday but exempted the festival from the purview of its protest. (Courtesy: IE)