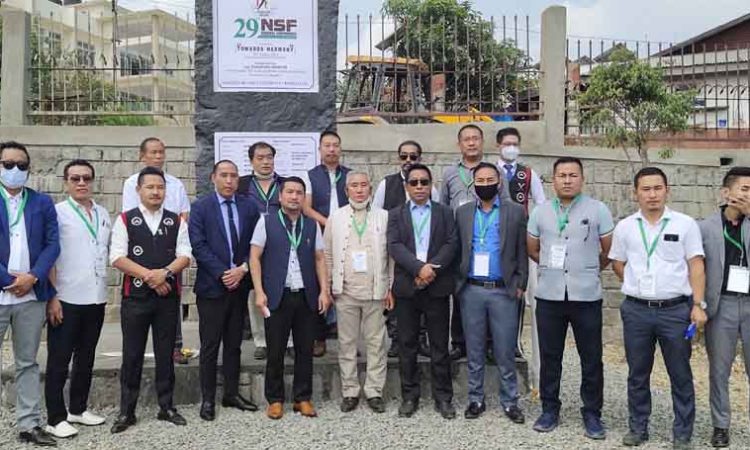 ‘Not a single apex organisation that represents the entire Naga community’

Kohima, AprIL 30: Nagaland Minister for Housing and Mechanical, Tongpang Ozukum on Friday lamented that Naga society is in shambles today, and expressed doubt that Nagas will ever progress under such condition.

“There is not a single apex Naga organization which has the representation of the entire Naga community, because of which, our voices are less heard and our forces are weaker because we are divided, we are fragmented, there is hatred and tribalism is deeply rooted in us,” is said while addressing the 29th general conference of Naga Students’ Federation (NSF) at Naga Solidarity Park here on Friday.
The irony is that “we urge the Naga National workers to unite as one; to come together as one,” he said.
Stating that Nagas cannot survive alone, he said, “We need to peacefully co-exist and have respectful relationships within the Naga societies and also with our neighbours. We must create a harmonious environment where respect, democracy, justice and peace are the founding stones of our interdependent relationships.”
In this, the Minister called upon Naga people to change their mindset, correct the mistakes, forgive each other of the past wrongdoings and move forward with the rest of the world to become a force for cooperation and collaboration.
‘Naga Issue’
On Naga issue, Tongpang said the Centre has made it clear that all issues concerning the Naga political problem are settled except the flag and Constitution. This, he said, was conveyed by Union Home Minister Amit Shah during a meeting with delegation of legislators led by Chief Minister Neiphiu Rio and Opposition Leader T R Zeliang on March 18 in Delhi.
“Shah said Gol gave a new proposal to the collective leadership and hoped for a positive outcome very soon. However, the next day when we met the collective leadership they said they have already replied to Gol’s new proposal and has made its stand very clear yet again that there is no compromise on flag and Constitution,” he said.
In this, Ozukum questioned, “Are we not worried of how things are unfolding… is there no meeting point?
“Unless both the parties (GoI and Naga negotiators) understand and respect each other’s positions, the hard earned peace and the positive progress of the talk thus far after more than 20 years of negotiation may collapse,” he said.
Maintaining that solution to Naga Political issue is for all Nagas, Ozukum said “therefore, as we continue to support the ongoing Indo-Naga political negotiation, we should also spell out what we desire, what will be the best for the present and the coming generations?”
‘Regain lost glory’
Ozukum recalled that 16 years ago, during the 21st NSF general conference held at the same historic place, Chief Minister Neiphiu Rio had said “NSF is undoubtedly one of the best, most organized, most discipline and powerful students’ organizations, not on in the North East but in the whole country”.
Agreeing to the CM’s comment of that year, Ozukum however said after 16 years he is not in a position to reiterate, repeat or re-state the same words and also not in a position to confidently say that NSF is one of the most organized, disciplined and powerful students’ organizations in the NE region.
“We have even failed to maintain the respect that we commanded from our counterparts,” he said, while questioning where do we stand now, where are we placed now? In this, he called upon the NSF to retrospect and introspect.
“True to the objectives of the Federation, NSF functions not only as the guardian of students’ community, but we function as a pressure group on all issues and contribute positively in formulation of important public policies,” he said.
“NSF is functioning till today and therefore we cannot deviate, nor shy away from the objectives and responsibilities of the Federation.”

‘RIIN’
Clarifying doubts on the exercise of the Register of Indigenous Inhabitants of Nagaland (RIIN), he said the exercise is intended for proper certification of indigenous inhabitant of Nagaland.
RIIN exercise will also look into the prevailing adoption practices in Nagaland, which, he said, is in line with NSF stand on Nagas by blood and not by adoption.
He said suggestions and valuable advice are always welcome for proper formulation of the policy so that no citizen is deprived of their inherent rights. (Page News Service)