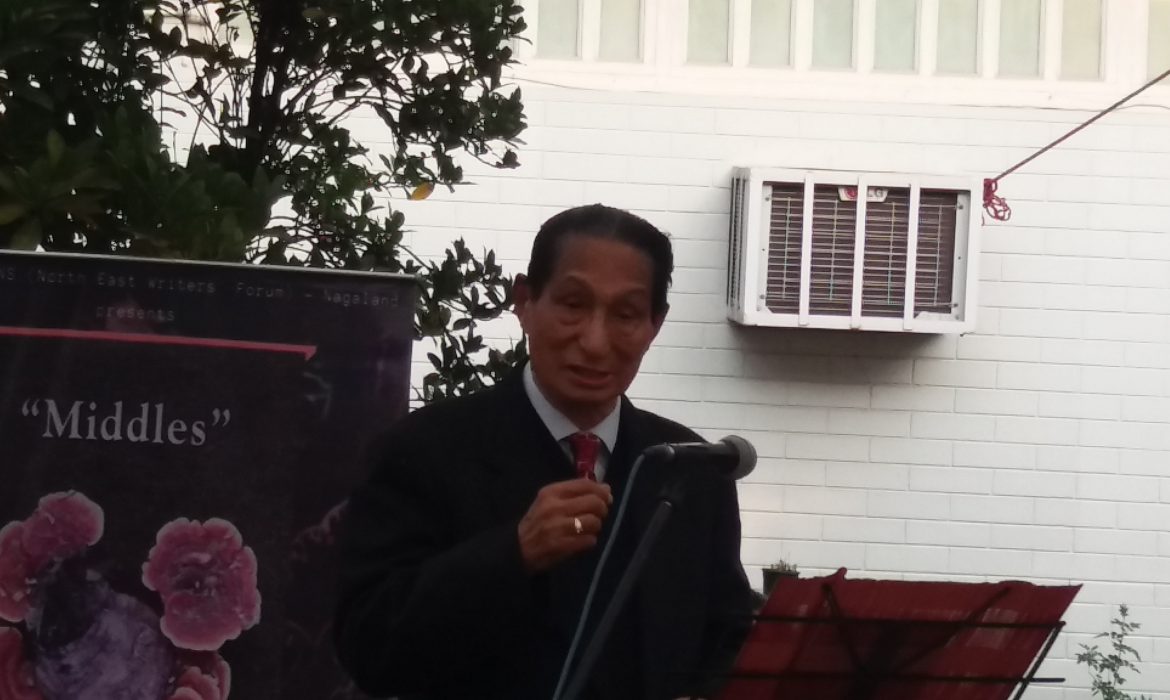 Says, Nagas are blinded by materialism

Dimapur, December 11: Former Governor of Odisha, Maharashtra & Goa, Dr S C Jamir today said that the dream for the people of Nagaland is completely shattered while the entire system is collapsed and the hallmark of Naga society today is “bankruptcy of morality”.
Speaking at the launch of Monalisa Changkija’s book “Middles” today, the former Chief Minister of Nagaland was critical about the state scenario and compared it with a mortally wounded person with serious head injury and helplessly groaning.
While justifying his comment that the people of the state are completely shattered, Dr Jamir said, “Nagaland appears to be a mortally wounded person with serious head injury and is helplessly groaning,” He said this was because he is helpless and there is nobody to help him and nobody cares.
Dr Jamir further said observed that the entire system has collapsed in Nagaland. “There is no system in our society, no ethics in our society and the hallmark of the Naga society is bankruptcy of morality.”
He reasoned that this has happened because Nagas are totally confused today and they don’t know what they are, and even the leaders don’t know where they are leading the people.
Dr Jamir, who is the living signatory of the 16-Point Agreement by which the state of Nagaland came into being said that the dream for Nagaland should be equal with the rest of the country as the dynamism of Nagas ,the tenacity of the Nagas, the bravery of the Nagas, the hard working nature of the Nagas were recognized not only by the white people but the people at large and that “we have that values and work culture.”
Recalling his experience about people when he was Governor of Odisha and Maharashtra, Dr Jamir said the people of those states feel that they live in a society where there is great opportunity to develop, to progress and that they can do it with hard work and by maintaining a clean effective administration and governance.
He also said there is tremendous competition amongst the youths, students, trade and business, industrialists and the competition is very fair. “But what is applied over our people today in Nagaland?” he asked.
He said there is no discipline, no system in governance, no credibility and respect in governance in Nagaland because Nagas are blinded by materialism.
“Materialism has blinded both eyes and ears. When a person is blind and deaf, they cannot see what is in place and you will not be able to hear what other people are doing or talking. And this is exactly where Naga people are placed today,” he explained.
The former chief minister also lamented that Nagas do not listen to the good advice. “We don’t listen to the counsel whether churches, intellectuals, writers…” he added.
Disclosing where the people have gone wrong, he said that Nagas have allowed demon to take over the rein of our society, our governance, even our religious institutions and “therefore we have totally lost our morality to control our society”.
“If you go to the village, what do they ask…if any leader come to you to share ideas…no they come only for money, and this is destroying the society everyday,” he said.
“Nagas are almost in ICU and if this is the case, should we allow Naga society to perish? Should we allow Naga people to die? Then what is the role of the youth, what should be the role of the writers?” he asked.
He also lamented that nobody is spelling out the remedies to these problems, as people are only concerned about their past.
“The choice before Naga people—Are we to live in the past or to live in the present and design the future. That is the crux of the people which we are facing today,” he said.
He appealed to the writers, especially journalists when they write, they should also focus on the plight of the people, and what kind of society Nagas are in today.
“…you have to focus also what kind of society we should have and you should also focus on the kind of future which Naga people should inherit,” he said.
He also said when the world is moving and everywhere people is talking about 21st century, people are talking about scientific development but today Naga people are quite obsessed with the past. (Page News Service)

CM goes into self-quarantine on return from Delhi