HomeTop StoriesNaga political solution has to be achieved within one year: Acharya
Top Stories
2 years agoJuly 25, 2019No tags 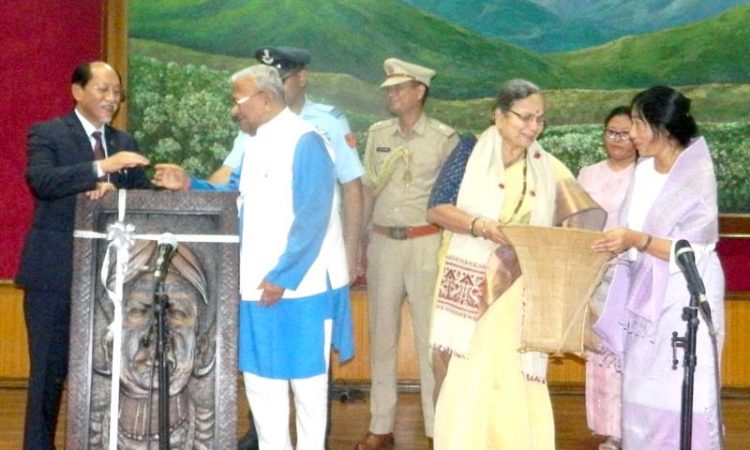 Kohima, July 25: Nagaland government today bid farewell to the outgoing Governor, P B Acharya and his lady wife at a solemn ceremony held in the State Banquet Hall here.
Acharya was sworn in as the 19th Governor of Nagaland on July 19, 2014.
In his farewell speech, Acharya said that unless the weaker section of the society is empowered the society as whole cannot be strengthened.
Reiterating his phrase “Nagaland is rich but Nagas are economically weak,” he said “the state cannot remain as what we are today but we also need to march along with other states towards development and progress as Nagaland too has equally contributed to the Independence and development of the country.”
In this, he expressed the hope that the new Governor R N Ravi, who will be taking over as the Constitutional Head of the State on August 1, will deliver goods and will also work for solution of the Naga political issue.
Naga political solution has to be achieved within one year, because Nagaland needs permanent peace for development and progress, he said. “We have Prime Minister Narendra Modi, who has the will and guts to resolve the issue,” Acharya affirmed.
He also called upon the five universities of the State not to be mere centres of education but to impart knowledge on the youngsters to be givers and take the society towards development and progress.
Nagaland can become strong only through Nagas, he said while also asserting to extend any support whenever required. “I am leaving as the Governor of the State but not the Nagas and I am always at your disposal,” Acharya said.
Chief Minister Neiphiu Rio in his speech said the contributions of Acharya as the Governor in social service, education and humanities will always be remembered.
“I can say with confidence that our people and our State have been enriched with his guidance and leadership,” he said.
Rio said that as constitutional head of the State, Acharya has had a meticulous and exemplary tenure.
“The State experienced a few political crisis during the past few years but the Governor conducted himself in an impeccable manner and upheld the Constitution of India in exemplary fashion, for which he deserves to be complimented,” Rio said.
The CM also placed on record sincere gratitude to both Acharya and his wife Kavita for opening the gates and doors of Kohima’s Raj Bhavan to all sections of the people.
“Kohima’s Raj Bhavan no longer looked like an unreachable ivory tower but emerged as a place of belonging for all sections of the people, especially the youth. You will be fondly remembered as the people’s Governor,” Rio said.
“Your support to the Government’s efforts towards realising permanent peace and solution to the Naga political issue is well appreciated,” the CM added.
Opposition Leader, T R Zeliang while congratulating Acharya for successfully completing his 5 years tenure as the 19th Governor of Nagaland, recalled the Framework Agreement between Government of India and the NSCN/GPRN which was signed on August 3, 2015 and also the seven NNPGs engaging in the talks.
As the Governor, Acharya had played his role in these important events first-hand which makes him an integral part of Naga history, he said while strongly believing that he will continue to support the Naga people for an amicable solution to the Naga Political problem, wherever he is, keeping his close association with all section of the Naga people and their cause.
“We will not forget your tireless effort to encourage the youths into entrepreneurship and your continuous support of the successive State Governments for maintaining peace and unity for the development and progress of Nagaland,” Zeliang said.
Maintaining that culture and tradition defines peoples’ identity, he hoped that Acharya’s concept of upholding one’s culture, tradition and language in order to preserve one’s identity will continue to guide, encourage and inspire the upcoming Naga generation.
“Your simplicity and down-to-earth attitude regardless of your position and good hospitality provided by your lady-wife, Kavita Acharya will ever be remembered by the Naga people,” Zeliang added.
Chaired by Chief Secretary Temjen Toy, the farewell programme commenced with prayer by State Chaplain Rev Kuzierang Thou while Deputy Chief Minister Y Patton delivered the welcome address.
Khedi Baptist Church, East Story and Harmonic Voices enthralled the gathering with special numbers. (Page News Service)