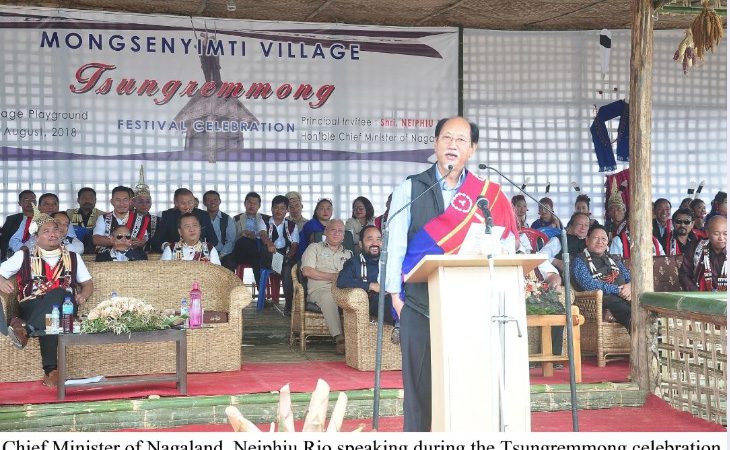 Dimapur, August 2: Chief Minister, Neiphiu Rio today called upon the Nagas to uphold, preserve and promote their history and culture as Government of India has recognized the uniqueness of Naga historical backdrop and its cultural heritage.
Gracing the 2nd day of Tsungremmong Hornbill Festival at Imkongmeren Sports Complex, Mokokchung, Rio said that the talk on solution to the Naga political issue is in an advance stage, and appealed to build mutual respect and maintain congenial relation with the neighbours.
Bringing Tsungremmong greetings to the people, Rio maintained that historical facts deemed Mokokchung District to be a “Land of Pioneers” as such it is befitting that Mini Hornbill Festival start from the district acting as a benchmark for other district hosting the festival.
On the development front, Rio said to provide better road connectivity in the state the government is pressing the Government of India to complete the Foothill road project now renamed as Trans Nagaland Highway which covers a distance of 428 km across 6 districts. He urged all the tribal Hohos and land owners to come forward and co-operate with the government to make the project a reality.
In an encouraging note to the youth, the Chief Minister said government is to setup a Regional Sports Academy in Dimapur commemorating Dr. T. Ao birth centenary. He also added that Dr. T. Ao Sports Award has been initiated to honour Naga sports person excelling in National and International sports arena.
Safeguarding the environment, Rio said government is all set to make Nagaland a plastic free zone by December 2018. In this note he called upon the people of mokokchung to lead the way for a greener and safer place.
On the occasion, the Chief Minister also released the progress report (2011-2018) of Mokokchung Entrepreneur Consortium (MEC).
Rio also participated in Tsungremmong celebration at Mongsenyimti village along with Deputy Chief Minister, Y Patton and Minister for Technical Education, Temjen Imna Along as special invitee.
Extending Tsungremmong greetings to the villagers and to all the communities celebrating the festival, he said that Mongsenyimti is a historical village because during British Administrative era the first sub-divisional administrative centre was setup in the village only after which it was shifted to Mokokchung. He said Mongsenyimti village is also a pioneer in spreading Christianity for which he called upon the people to emulate the past generation by preserving the tradition.
He also congratulated the villagers and constituency in general for electing Tongpang Ozukum, Minister for PWD, who is a person of high education and experience with leadership quality to represent the constituency in the government. He expressed hope that under his leadership the people will be benefited.
In the Mini Hornbill Festival, a government programme, Rio said this festival is very significant for Mokokchung as the programme kick starts from the District. The objective of the programme is to showcase the scenic beauty, culture, costumes, hospitality, bio-diversity and to maintain brotherhood among the people which in return will attract tourist into the state.
Summing up his speech he called upon one and all to repent and to sanctify oneself on the auspicious festival and wished a good and bounty harvest.
Delivering a short speech, Deputy Chief Minister, Y. Patton called upon the gathering that the festivals are not only for merry making but also to pray and invoke God’s blessing.
Temjen Imna Along said that in olden days our forefathers celebrated Tsungremmong in their traditional way but in modern days one must celebrate Tsungremmong festival for peace, tranquility and brotherhood of man in our society.
Tongpang Ozukum, Minister for PWD who is from Mongsenyimti village spoke on behalf of the host village. Highlights of the programme included presentation of cultural items from Mopungchuket, Pongching, Merangkong and New Yaongyimti villages. (Page News Service)