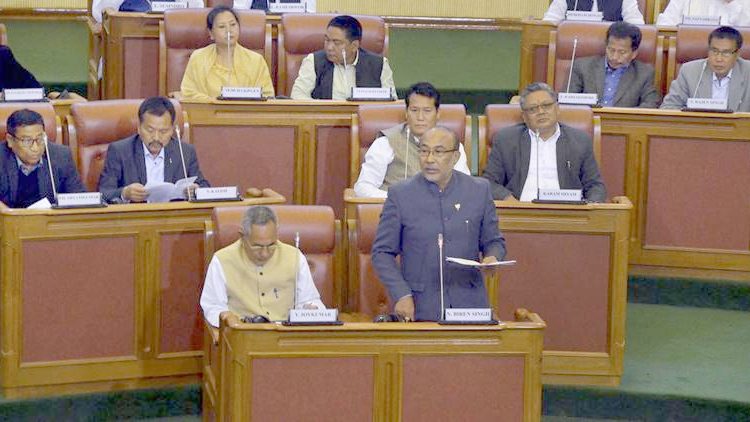 GUWAHATI, December 21: As speculations in Nagaland are rife the final Naga agreement is in the offing, the Manipur Assembly has reaffirmed an earlier resolution on the protection of the state’s territorial integrity.
The resolution, passed by the House in 2017 and reiterated in 2018, disapproves any change in the state’s present administrative setup or granting of autonomy to any of its part as a result of the “Framework Agreement” which the Centre had signed with insurgent group National Socialist Council of Nagalim (NSCN-IM).
The Assembly reaffirmed on Friday: “This House unanimously resolves to reaffirm resolution No 121 adopted on July 23, 2018 to reiterate the resolution No 120 passed by this House on December 22, 2017 for amendment of Article 3 of the Constitution of India by incorporating that prior consent of the state legislature of the affected states shall be mandatory while forming a new state or changing names of existing states and also to request the Government of India to make contents of the Framework Agreement available to the Government of Manipur; there shall not be any change in the present administrative setup of the state of Manipur, and not to grant any kind of autonomy to any part of the state as a result of the Framework Agreement leading to resolution of the Naga political issue”.
Congress MLAs R K Imo and A K Mirabai had sought a firmer resolution on the state’s territorial integrity vis-à-vis the Naga issue. To this, Chief Minister N Biren Singh apprised the members of the current situation as regards the Naga issue and proposed the House to reaffirm the earlier resolution.
Till date, the Manipur Assembly has adopted 12 such resolutions on the protection of state’s territorial integrity. Two of these were adopted under the present BJP-led coalition government.
A demand of the NSCN-IM is the creation of a unified Naga homeland called “Nagalim” by integrating the Naga-inhabited areas of Manipur besides Assam and Arunachal Pradesh with Nagaland.
Given the contentious nature of the demand, there is a perception the Centre might grant some kind of autonomy to the Nagas settled in the three states. Groups and organisations, particularly in Manipur, have, however, made it clear that they would neither accept Manipur’s disintegration nor changes in its administrative setup. (Courtesy TNIE)