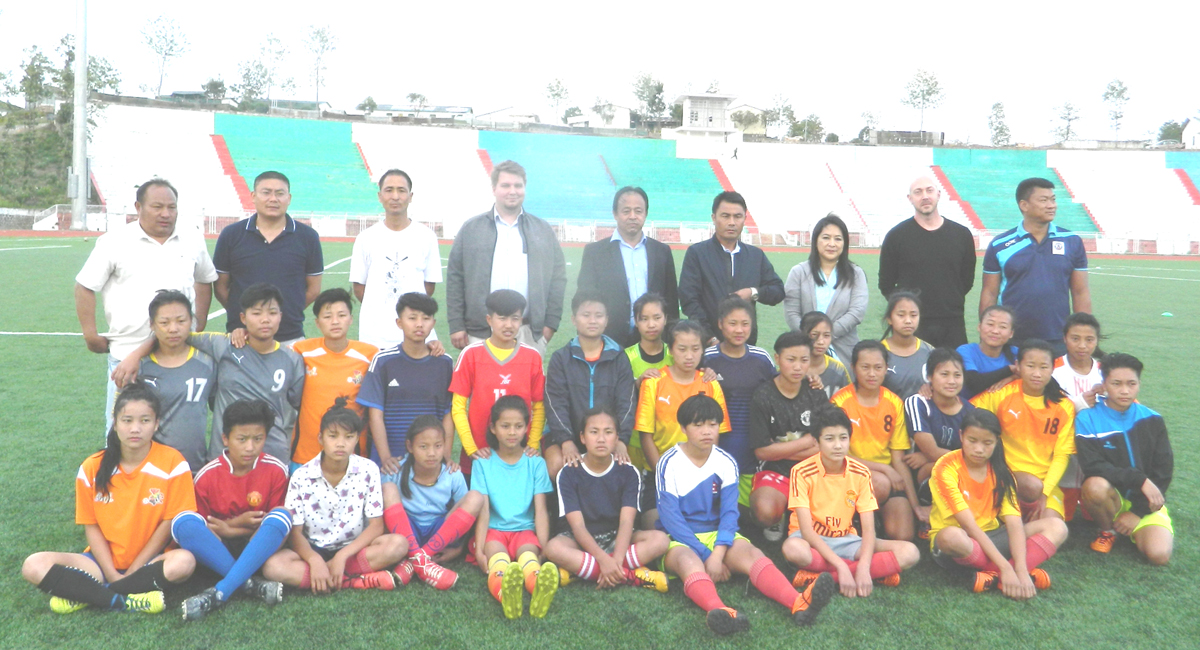 Kohima, May 1: Nagaland’s U-15 is undergoing rigorous coaching to participate in the forthcoming Ghotia Cup 2019 at Gottenburg Sweden, said Advisor for Youth Resources and Sports, Zale Neikha.
Addressing media persons at the IG Stadium here Wednesday, Neikha said that his department is making the first ever such initiative to take the local talents for exposure beyond the country in commemoration of the 100th year birth anniversary of legendary Naga footballer Dr T Ao.
He informed that the department of youth resources and sports in collaboration with Soccer Competition is conducting a training session since March this year for selecting U-15 girls football state team to play in Sweden.
Neikha said observing the potential of the athletes and identifying the need for providing an alternate exposure, the Department with the joint effort of Mirucki invited FIFA Grade-A coach Sebastian Rasmussen to prepare and select the team to participate in the upcoming tournament scheduled from the July 14 next.
Soccer Competition aims at a three-pronged approach by not only training the girls team but also working together with the state coaches and ultimately taking the team to participate in Ghotia Cup, which is the world’s largest international youth football tournament, said the Chief Executive Office of Soccer Competition Germany, Mike Mirucki.
With the objective of football without racism and gender equality, the state’s U-15 girls team under the name SC Nagaland has been enrolled to participate in the tournament, he informed.
On the selection criteria of the Naga sporting damsels for the coaching, Mirucki said that proper advertisements made calling interested players to undergo coaching but only one turned up while the rest are from Indira Gandhi Sports Academy Kohima.
Further, Mirucki informed that enthusiastic girls can still join the training session between 3:30 to 5PM from Monday to Friday.
Replying to a query on why male footballers have not been given the opportunity, Neikha informed that an agreement is being made with Bhaichung Bhutia Football Schools to train the male footballers. YRS Director Akumla Chuba supplemented saying that the coaching would commence very soon.
FLOOD LIGHTS INSTALLED:
Advisor Zale informed that the flood lights installation at the only astro turf football pitch has been completed but due to non arrival of the generator it currently not in use. Director Chuba said the generator would be arriving within next couple of weeks.
On the conduct of North East Dr T Ao Tournament, which was earlier supposed to be held in April, Zale said it couldn’t be held because of the announcement of Lok Sabha elections and the Model Code of Conduct coming to force. He however asserted that the tournament would be held by October-November.
Meanwhile, on the security code of the IG stadium complex, Secretary YRS, Lhouchalie Viya said that after the Lok Sabha elections are over the Department would deploy police personnel on round the clock duty restricting unwanted entry into the vicinity.
Further, the officials of the department also clarified that the missing penalty spot from the astro-turf ground has been removed because of some defects and would be replaced very soon.
(Page News Service)