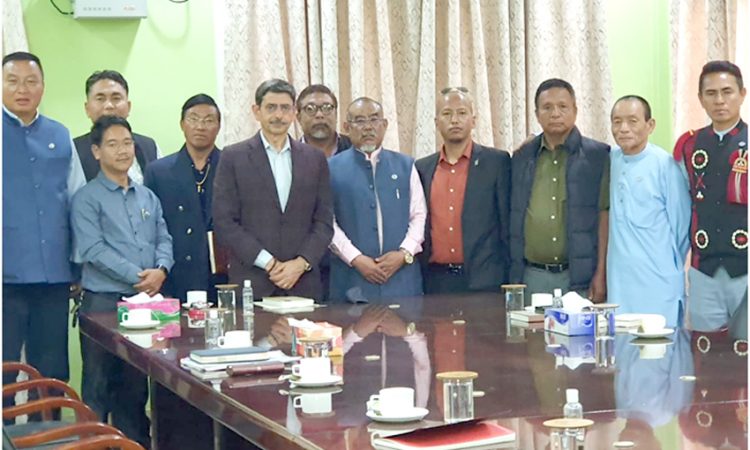 The members of NNPGs with Governor of Nagaland R N Ravi

DIMAPUR, FEBRUARY 22: Following their latest round of meeting, the Working Committee of NNPGs and the Centre’s Interlocutor for Indo-Naga talks and Governor of Nagaland, RN Ravi have reportedly come to agreement that there are Naga elements at work to prolong and sabotage the signing of Indo-Naga agreement.

This provides another twist to the ambiguity that emerged from the just concluded Budget Session of the Nagaland Legislative Assembly in which Ravi, in his opening speech, had declared the talks concluded.
However, the NLA members, in the course of the same session, adopted a set of resolutions on Naga issue including one wherein it had urged the negotiating parties to sit across the table for the conclusion of the political negotiation.
The WC, NNPGs issued a press statement on Monday informing that it had met with Ravi at at Police Complex, Chumoukedima on February 20.
“The GoI interlocutor was asked and made several clarifications on the pressing matters on impeding Indo-Naga political settlement. Both sides agreed that there are Naga elements at work to prolong and sabotage the signing of Indo-Naga agreement. Over the last few months various groups and organisations have spammed the media outlets with propaganda and fake news in an effort to stay relevant and confuse, mislead Naga tribes and civil societies.
“This is a crucial time not only for the Naga people with regard to their political aspiration but a testing time for the Government of India as well. The political, economic and social turmoil in recent times have slowed down the progress on all spheres. The Naga question too has lost precious time, nevertheless, WC, NNPGs believes that the settlement bound Naga tribes and civil societies must stay focussed on the objective and not be swayed by narrative of habitual propagandists on Naga issue,” the statement read.
According to the committee, the ‘Agreed Position’ signed between GoI and WC, NNPGs and subsequent negotiated status paper is there for all tribal leaders, village headmen, former and present legislators, politicians, social activists, academicians and general public to study.
Post-settlement, there is sufficient historical and political space and scope to reflect Naga characteristics in Naga areas of Manipur, Arunachal Pradesh and Assam through political and administrative measures even as integration of Nagas remains a democratic aspiration, it stated.
“There are elements fooling fellow Nagas in Manipur that WC, NNPGs is pursuing solution for Nagas of Nagaland. This press statement puts to rest their diabolical and self isolating agenda. Those who ran away from inclusive solution can only think and propagate exclusivity. The reasoning of 14 tribes of Nagaland, NTC, NGBF, ENPO, CNTC and minority communities and the rest of the Naga populace, including Nagas in other states and in Myanmar is not for anyone to question. Nagas are prepared for inclusive, acceptable and honourable political solution. The seven Naga National political groups under the banner of WC, NNPGs, is the messenger between GoI and the Naga people. The negotiations have concluded with active participation and co-operation of the Naga tribes and customary guardians. This is not the hour to waste on abject propaganda,” it asserted.
‘Clarify status of Niki’
The committee also asked the government of India to clarify, through the interlocutor, the status of Niki Sumi and his group.
“On 26 Dec. 2020, mainland news channels and print media carried the interview of Indian army Chief Gen. Manoj Mukund Naravane citing NSCN (K) leader Gen. Niki Sumi and his followers including Starson Lamkang and fifty two others had surrendered to the Indian army. It is now three months and there has been no response either of denial or acceptance or surrender from Gen. Niki Sumi. Unfortunately the civil societies meeting the group have not been forthcoming either on whose payroll the group is being accommodated and on what status,” it stated.
According to the committee, there have been multiple activities bordering on confusion. It pointed out that in November 2020, the convenor of WC, NNPGs had officially invited Niki Sumi to partner the committee in the peace process.
“The invitation was politely declined. Much water has flowed down the river since. The Naga people deserve to know the truth with regard to the status of Gen. Niki Sumi and his group. The clarification of GOI through the interlocutor on this matter is important.
“The Government of India has made it crystal clear that the political negotiations with all entities had concluded as on 31st Oct. 2019. There will be no more talks. The question of starting new political talks with the new group or for that matter fresh ceasefire with any other group is ruled out,” it stated.

The committee stated that Ravi confirmed the official position of the government of India in saying that Niki Sumi had surrendered. It is therefore appropriate that if there has been an act of surrender as was declared by Indian army chief on 26th Dec. 2020 and which continues to be the official stand of GoI, the surrendered officers and men may honourably leave the political matters to Naga national leaders and workers, it maintained.
WC, NNPGs also appealed to Niki Sumi and his men to refrain from encouraging and recruiting innocent people to join his group.
“Once again the GoI has reaffirmed its position on the Naga issue. There will be an inclusive solution. Naga integration and other unresolved matters would be pursued through democratic political process, WC, NNPGs has negotiated much to secure and safeguard the political, historical and administrative interest of Naga people and land in Manipur, Arunachal Pradesh and Assam. This remains an integral part of impending GoI-WC, NNPGs agreement,” it asserted. (Page News Service)