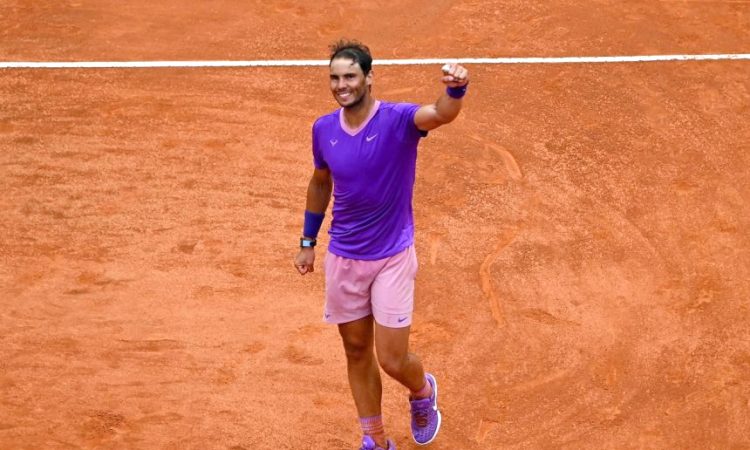 Rafael Nadal celebrates after winning his tennis match in Rome, on May 14, 2021.PHOTO: AFP

Second-seed Nadal lost to Zverev in the Madrid last-eight last week, but ended his three-match losing streak against the German in the Foro Italico.
“It was an important victory for me against a great player,” said the Spaniard.
The 34-year-old shook off his marathon 3hr 30min quarter-final battle past Denis Shapovalov on Thursday where he needed to save two match points.
Nadal powered to 4-0 before sixth seed Zverev held serve with the 20-time Grand Slam winner saving break point to take the first set.
The German rallied in the second set but Nadal saved eight break points to seal victory on his first match point after two hours.
Nadal next plays big-serving American Reilly Opelka for a place in the final for an 11th time as he warms up for the French Open starting on May 30.
Opelka, ranked 47, reached his first Masters semi-final with a 7-5, 7-6 (7/2) win over Argentine qualifier Federico Delbonis.
“It’s a big challenge against a player who’s playing well and has almost an unreturnable serve,” Nadal said of Opelka who has not dropped a set all week.
“I’ve served well especially at big moments, that’s been key, I stayed calm,” said Opelka, who has hit nearly 80 aces this week.
“I’ve made some adjustments on my serve recently and it has paid off.”
Nadal is two wins away from equalling Novak Djokovic’s record of 36 ATP Masters 1000 titles.
He is also attempting to win 10 or more titles at a single event for the fourth time, after Roland Garros (13), Barcelona (12) and Monte Carlo (11).
Zverev, 24, had been on a seven-match winning streak, following his second title run in Madrid last week.
Karolina Pliskova

Former Rome champion Karolina Pliskova rallied from a set down and saved three match points to advance to the semi-finals of the Italian Open on Friday.
Pliskova, winner in 2019 and runner-up last year, battled past Latvia’s Jelena Ostapenko 4-6, 7-5, 7-6 (7/1).
The ninth-seeded Czech will meet Croatia’s Petra Martic for a place in the final.
Martic, ranked 25, ended the run of American Jessica Pegula 7-5, 6-4.
Pegula had dispatched number two seed Naomi Osaka of Japan on her way to her fourth quarter-final this season.
“Just proud, I think mostly, how I fought,” said Pliskova, who saved three match points at 5-4 in the final set before storming back to victory after two hours and 20 minutes.
“It was definitely a horrible start for me. I’m just happy that I stayed in there and fought till the end.”
It was the second clay-court win for Pliskova over Ostapenko, having come from a set down against the Latvian in Stuttgart last month.
Each player broke serve seven times, but Ostapenko paid heavily for 14 more unforced errors than her Czech rival.
Reilly Opelka

American Reilly Opelka booked a spot in his first Masters semi-final on Friday with a straight sets win over Argentine qulifier Federico Delbonis in the Italian Open.
Opelka, ranked 47th, sealed victory on his first match point to win 7-5, 7-6 (7/2) in 1hr 41min for his fourth victory of the week without dropping a set.
The 23-year-old will next meet either nine-time Rome winner Rafael Nadal, the number two seed, or Germany’s Alexander Zverev, the 2017 champion, for a place in the final.
“I’m surprised, clay’s not really my thing, not an American thing, it’s probably just a fluke,” said the player from Michigan.
“I’ve served well especially at big moments, that’s been key, I stayed calm,” continued Opelka, who has hit nearly 80 aces this week in the Foro Italico.
“I’ve made some adjustments on my serve recently and it has paid off.”
Opelka, who arrived in Rome on a six-match losing streak, has been on the comeback after a slump in form having suffered from Covid-19 earlier this year.

“I’d only played one tournament on clay. I had Covid. I wish I could use that as an excuse, but I just didn’t play well.” (AFP)