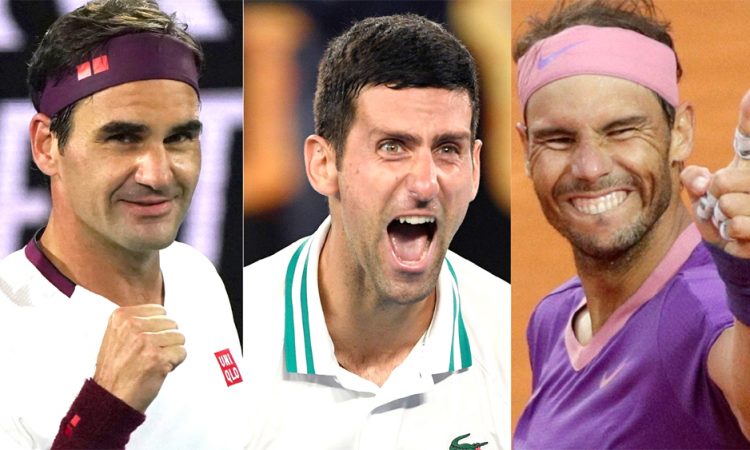 PARIS, May 27: Rafael Nadal, Novak Djokovic and Roger Federer, the three most successful men in Grand Slam tennis history, were on Thursday all drawn in the same half of the French Open.

Having slipped to number three in the world, it was always likely that Nadal, the 13-time champion, would face top-ranked Djokovic before the final.
Djokovic, the 2016 champion, is top seed and could face 2009 winner Federer in the quarter-finals.
‘No one is invincible’, says Rafael Nadal ahead of French Open
Rafael Nadal said “no one is invincible” in an interview on Thursday as he targets a 14th French Open title and record-setting 21st Grand Slam crown.
“No one is invincible, anywhere,” said Nadal whose career record at Roland Garros stands at 100 victories against just two losses since his title-winning Paris debut in 2005.
“This year I lost (early) in Monte Carlo and Madrid. I hope not to lose here at Roland Garros. What I can do is fight.”
Victory in the final in Paris on June 13 will take Nadal past the record of 20 majors he currently shares with Roger Federer.
Despite his remarkable history in Paris, Nadal, who turns 35 on June 3, admits he remains stunned at his longevity in a sport where he has been an ever-present in the world top 10 since 2005.
When asked if he could have imagined still playing at 35, he said: “Ten years ago, no. But if you had asked me the question two years ago, maybe I would have answered yes.
“Ten years ago, I had so many physical problems that it was difficult for me to imagine that my career would last so long,” added the Spaniard whose career has been plagued by a series of knee injuries.
Nadal will start this year’s French Open as the overwhelming favourite once again, boosted by his recent win over world number one Novak Djokovic in the Rome Masters final.
Of Nadal’s 88 career titles, 62 have come on clay.
He has won at least 10 times each at Roland Garros, Monte Carlo, Rome and Barcelona.
Between 2005 and 2007, he went on an 81-win streak on clay.
In his great rivalry with Djokovic, which stands at 29-28 in the Serb’s favour, Nadal holds the upper hand on clay.
He has a 19-7 record on the surface against the world number one and is 9-4 in finals.
Three of those championship match wins came at Roland Garros in 2012, 2014 and 2020.
However, he will still be wary of Djokovic, the 2016 champion in Paris.
The Serb handed Nadal one of his two losses at the French Open, in 2015, six years after Robin Soderling had been the first man to achieve the feat.
“Roland Garros is a very special place for me,” said Nadal.
“Favourite or not, that is not the question. What matters is to play well, and the one who plays the best will be whoever has the most chances of winning the tournament.
“My goal is to be the one who plays the best.”
Nadal describes Roland Garros as “the cathedral of clay” but he admitted to AFP that other clay court events were a more natural fit at the start of his career.
“At the beginning, I think I played better in Monte Carlo or in Rome, to be honest,” he said.
“It is more difficult to have a good feeling at Roland Garros, the court is very big and there are different sensations.
“I never had bad feelings here, but it is also true that I had very good feelings in other tournaments on this surface.”
Nadal said it is impossible to pick out which of his 13 titles in Paris is the most memorable as “each one has had a particular resonance in my career”.
However, he has no hesitation in pinpointing the low points.
“My worst memories are without a doubt 2009 and the loss to Soderling, but also 2016, when I had to give up due to a wrist injury.”
This year at the “cathedral” of clay court tennis in Paris’ leafy western suburbs, a statue of Nadal has been erected in the grounds.
While thankful for the gesture of the French Tennis Federation, such very public recognition is hard to square with the decidedly unstarry Nadal.

“It’s true that what I accomplished in Paris, even if I don’t like to say it, it’s something very, very special.
“I am grateful and I understand the gesture: I accomplished something that was very difficult to imagine,” he said. (AFP)