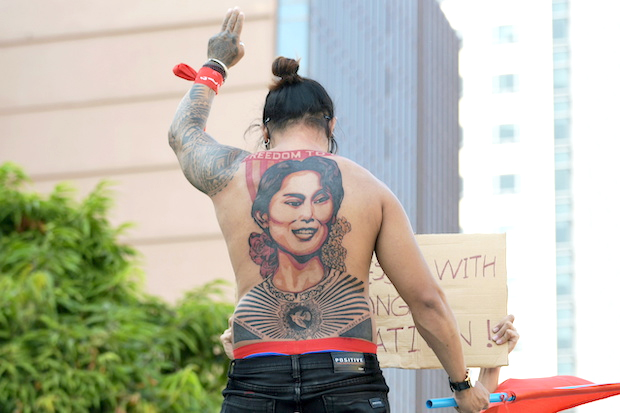 A man with a tattoo of Aung San Suu Kyi takes part in a protest against the military coup and to demand the release of the elected leader in Yangon, Myanmar, on February 8, 2021. (Photo from REUTERS)

YANGON, March 18: Myanmar’s ousted leader Aung San Suu Kyi will be hit with fresh corruption charges from the country’s military junta, a decision slammed by her lawyer as “groundless and illogical” on Thursday.

The new military regime has already issues several criminal charges against the Nobel laureate since she was detained alongside top political allides last month, including owning unlicensed walkie-talkies and violating coronavirus restrictions.
On Wednesday night, military broadcaster Myawady aired a video of a Myanmar businessman confessing to giving her a total of $550,000 over several years.
Maung Weik said he had donated money to senior government figures for the good of his business.
“Aung San Suu Kyi committed corruption and (authorities) are preparing to charge her according to anti-corruption law,” an announcer said during the broadcast.
This is not the first time corruption allegations have been lodged against her.
Last week a junta spokesman said a now-detained chief minister had admitted to giving her $600,000 and more than 10 kilograms (22 pounds) of gold bars.
“Those accusations are groundless and illogical,” Suu Kyi’s lawyer Khin Maung Zaw told AFP.
“Aung San Suu Kyi may have her defects… but bribery and corruption are not her traits,” he said, adding that most people in Myanmar will not believe the allegations.
Myanmar has been in uproar since February’s coup, with hundreds of thousands of protesters flooding streets demanding a return to democracy and the release of Suu Kyi.
The junta has justified the move by claiming electoral fraud in elections last November that were won by Suu Kyi’s party in a landslide.
Security forces have increasingly stepped up lethal force against demonstrators.
Local monitoring group the Assistance Association for Political Prisoners has reported the killing of more than 210 people in crackdowns across the country. Thailand braces as refugees from Myanmar coup flee to border regions

Hundreds of people have fled Myanmar’s towns and cities since last month’s military coup and are sheltering in areas controlled by ethnic militias on the Thai border, an official from one of the groups said on Thursday, as Thailand prepared for a surge of refugees.
An official from the Karen National Union (KNU), which has been fighting the Myanmar army for decades, said almost a thousand people were sheltering inside KNU-controlled territory.
Myanmar’s security forces have killed at least 217 people in their crackdown against opposition to the coup, according to the Assistance Association for Political Prisoners, a civil rights group in Myanmar.
“Hundreds of people are now in our area,” Padoh Saw Taw Nee, the KNU’s head of foreign affairs, said in an interview.
“Some are strike leaders, some are involved in CDM (civil disobedience), government staff … deserters of police and military and then also some MPs (members of parliament) and doctors.”
He said a smaller number had also sought shelter further north, on the border with Shan state, in a region controlled by another ethnic militia.
More than two dozen ethnic armed groups are active in Myanmar’s borderlands, and the KNU is among those that have condemned the coup and vowed to support the resistance.
Padoh Saw Taw Nee said a ceasefire agreement with the government prior to the coup had become “paralysed”.
“We strongly support CDM movement and people’s demonstration,” he said, echoing calls for Myanmar to become a democratic federation.
A spokesman for the junta did not answer phone calls seeking comment.
Thai authorities are bracing for a surge of refugees and have set aside areas to shelter more than 43,000 people in Mae Sot district, according to plans seen by Reuters.

Thai army colonel Prasan Henprasert said border patrols had been increased.
“If there are clashes then we have to assess the situation and have areas prepared,” he said.
“Based on our experience, many people may cross and go back when the situation is safer because they have their homes on the other side.” (AFP/Reuters)