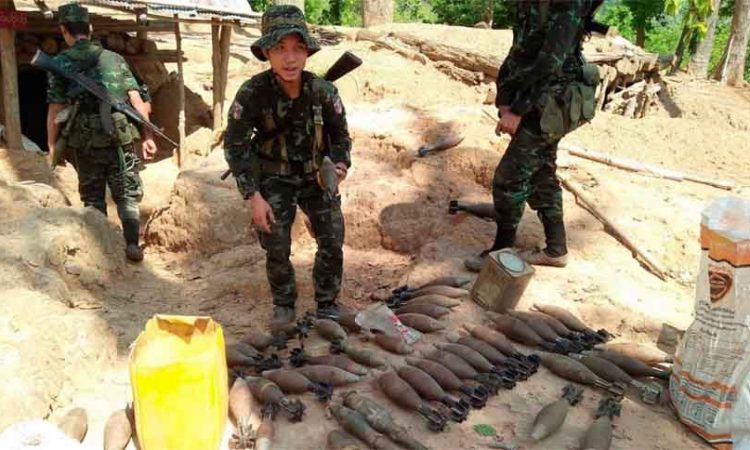 Bangkok, May 7: Guerrilla soldiers from Myanmar’s Karen ethnic minority burned down a government military outpost on Friday after capturing it without a fight when its garrison fled, a senior Karen officer said.
The position is approximately 15 kilometers (nine miles) from a larger camp that the Karen National Liberation Army stormed and burned 10 days earlier. The KNLA is the armed wing of the Karen National Union, the main political organization representing the Karen minority, whose homeland is in eastern Myanmar.

The Karen and the Kachin in northern Myanmar are the two major ethnic armed organizations that have allied themselves with the movement against the junta that took power in Myanmar after the army ousted the elected government of Aung San Suu Kyi in February.
The role of the ethnic fighting groups has become more important as the number of people joining street protests in Myanmar’s cities and towns has declined, in large part due to deadly violence increasingly used by security forces to suppress them. Hundreds of demonstrators and bystanders have died.
There is now daily fighting between the government and the military forces of the Karen and the Kachin.
A shadow National Unity Government formed by the junta’s foes announced this week the formation of a People’s Defense Force intended to serve as a precursor to a Federal Union Army of democratic forces including ethnic minorities, underlining the major rule they may play.
Video provided to The Associated Press showed KNLA soldiers on Friday inside the U Thu Hta base – a group of wooden buildings and trenches cut into a forest – inspecting mortar shells left behind by the government military. The camp is close to the Salween River, which marks the border with Thailand.
Yesterday our troops fired a few shots and today when we approached there was no one there, so we just entered, KNLA Maj. Gen. Ner Dah Mya said by phone Friday.
Fighting between the guerrillas and the Myanmar army has been increasing since last year but escalated after the military’s seizure of power.
The Karen National Union has been fighting for greater autonomy for the region for decades. It has denounced the February coup and given shelter to opposition supporters evading arrest. As well as confronting the army on the battlefield, the KNLA has reportedly been training hundreds of young activists from the cities in the rudiments of guerrilla warfare.
The attack raised the likelihood of retaliatory air strikes by the Myanmar military and a surge of refugees trying to flee into Thailand. Myanmar military jets have launched around 30 attacks since the end of March, targeting Karen villages as well as KNLA positions, according to aid groups active in the area.
Several thousand people crossed the Salween River into Thailand in April but Thai authorities insisted they go back to Myanmar.

The U.N. Office for the Coordination of Humanitarian Affairs said last week that 40,000 people have been newly displaced in Karen territory by intensified fighting between the government and the KNLA, and by indiscriminate attacks by Myanmar’s army on civilian areas.
Many of the displaced villagers have been hiding out in jungles, caves and valleys.(AP)