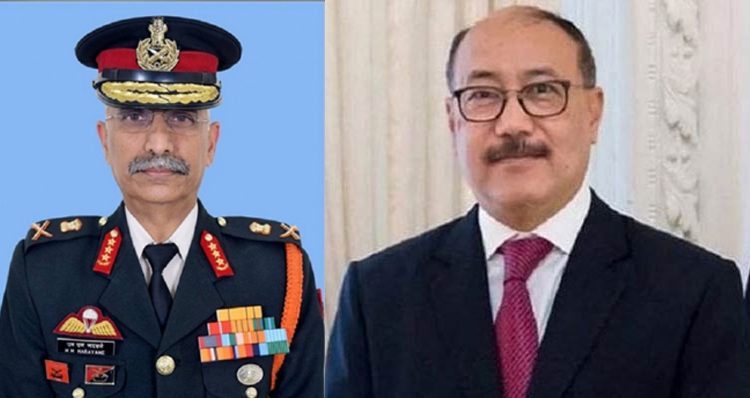 Nirendra Dev
NEW DELHI, OCTOBER 3: Amid the advanced stage in Naga peace parleys and the Centre extending the ban on NSCN (Khaplang), which operates from Western Myanmar region, Indian diplomacy with Myanmar will be crucial for peace and handling ‘insurgency’ in the Northeast.
Officially it was announced on Saturday that Chief of Army General MM Naravane and Foreign Secretary Harsh Vardhan Shringla will make a 2-day visit to Myanmar from Sunday.
During their visit, the Indian delegation will call on the State Counsellor of Myanmar, Aung San Suu Kyi and Commander-in-Chief of the Myanmar Armed Forces, Senior General Min Aung Hlaing.
These engagements could turn out to be crucial for peace in Nagaland and Manipur.
“India-Myanmar relations are historic, multifaceted and marked by mutual trust and respect. India attaches high priority to its relationship with Myanmar in accordance with its ‘Neighborhood First’ and ‘Act East’ policies. In recent times, both sides have strengthened their cooperation in several areas, including connectivity and trade, development projects, energy, capacity building, defence and security and culture and people to people links”, an MEA statement said in Delhi.
On September 28, the Centre extended the ban on the Naga militant group NSCN (Khaplang) and also said that the group has been engaged in “unlawful and violent activities thereby undermining Government of India and Government of Nagaland, Manipur and Arunachal Pradesh and spreading terror and panic among the people”.
This group had walked out of the talks process in 2015 and has been allegedly involved in 104 violent incidents since September 28, 2015.
The Home Ministry notification also said the NSCN-K is continuously embarking on a drive for the recruitment of cadres to continue its terrorist activities, establishing camps and hideouts across the international borders.
In recent times, the Government of India has been alert about the activities of Naga groups.
It may be mentioned that during the State Visit of the Prime Minister Dr Manmohan Singh to Myanmar in May 2012, an MoU was signed on India-Myanmar Border Area Development.
The MoU provides for USD 5 million each year over a period of 5 years.
This MoU has been extended till 2022. The programme, which is in an advanced stage, has seen the successful implementation of around 140 projects such as roads and bridges, health care centres, schools, and other such infrastructure projects.
These projects, undertaken in the Chin State and Naga Self-Administered Zone, have been known to deliver enormous benefits to the people and have been empowering the local communities, an informed source said.
In August 2020, the Ambassador of India to Myanmar also handed over a cheque of USD 5 million to Lt-Gen Ye Aung, Minister for Border Affairs, Government of Myanmar, for the 3rd year projects. Both sides will soon commence work on identifying projects to be undertaken in the 5th cycle, the source said.
Rohingya issue
India, as a close friend, partner, and neighbour of both Bangladesh and Myanmar, has a deep and abiding interest to see an early stabilization of the situation in the Rakhine State. India supports safe, sustainable, and speedy repatriation of displaced persons from Bangladesh to Rakhine State based on the understanding between Bangladesh and Myanmar.
India fully understands the urgency of this situation and has committed humanitarian efforts in both Myanmar and Bangladesh to facilitate an early return of the displaced persons. India has provided 5 tranches of relief supplies to Bangladesh and is willing to do more.
Recently, New Delhi has suggested establishment of a skills training centre in Rakhine.
All these efforts are aimed at ensuring an early return of displaced persons to Rakhine State in Myanmar.