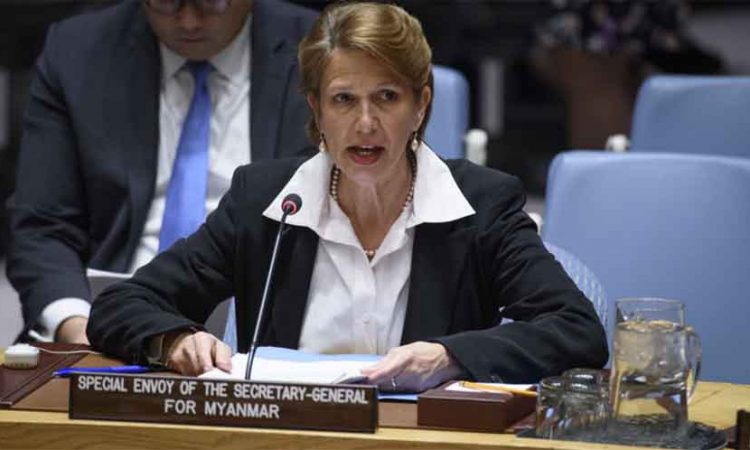 NEW YORK, MAY 1: The UN special envoy on Myanmar told the Security Council on Friday that in the absence of a collective international response to the country’s coup, violence is worsening and the running of the state risks coming to a standstill, according to diplomats who attended the private meeting.

Christine Schraner Burgener briefed the 15-member council from Thailand, where she has been meeting with regional leaders.
She still hopes to travel to Myanmar ~ where a February 1 military coup ousted an elected Government led by Aung San Suu Kyi ~ but the military is yet to approve a visit. Pro-democracy protests have taken place in cities and towns across the country since the coup.
“The general administration of the state could risk coming to a standstill as the pro-democracy movement continues in spite of the ongoing use of lethal force, arbitrary arrests and torture as part of the military’s repression,” Schraner Burgener said, according to diplomats.
She told diplomats that reports of a continuing crackdown risked undermining momentum toward ending the crisis following a meeting of the 10-member Association of Southeast Asian Nations (ASEAN) on Saturday with the junta leader, Senior General Min Aung Hlaing.
In a statement after the meeting, the Security Council stressed the “importance of ASEAN’s call for an immediate cessation of violence and called for implementation of the 5-Point Consensus without delay as a first step towards a peaceful and sustainable solution through constructive dialogue.
“The Assistance Association for Political Prisoners advocacy group says more than 3,400 people have been detained for opposing the coup and security forces have killed at least 759 protesters. Reuters is unable to confirm the casualty toll. The military, which ruled for almost 50 years until launching a tentative reform process a decade ago, has acknowledged the death of some protesters, saying they were killed after they initiated violence.
The Security Council reiterated its “deep concern” at the situation in Myanmar and its support for Myanmar’s democratic transition. The Council has issued several statements since the coup. Some diplomats say Russia and China are likely to prevent any stronger council action against Myanmar.

Schraner Burgener said there were concerning reports that civilians, mostly students from the urban areas, were being trained how to use weapons by ethnic armed organizations.
“In the absence of a collective international response, there has been a rise in violence and reported use of improvised explosive devices. Calls for maximum restraint by all sides have been met with responses from some protesters asking who can blame them for their self-defense,” she said, according to diplomats. (Agencies)