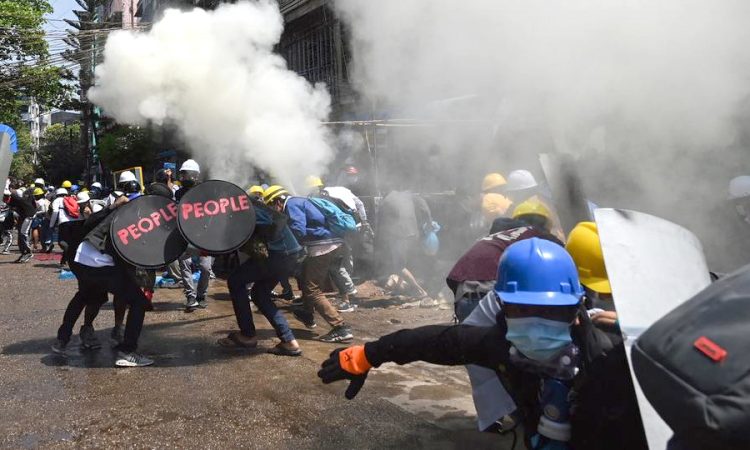 Protesters react after tear gas is fired by police during a demonstration against the military coup in Yangon on March 7, 2021. (AFP)

YANGON, March 7: Thousands of Myanmar anti-coup demonstrators defied an ongoing military crackdown on Sunday, following overnight raids in Yangon in which an official from Aung San Suu Kyi’s party was beaten to death and several others were detained.

Myanmar has been rocked by unrest since a February 1 coup ousted civilian leader Suu Kyi from power and triggered a mass uprising opposed to the new military junta.
Wednesday was the deadliest day so far, with the United Nations saying at least 38 people were killed as security forces fired into crowds, shooting some protesters in the head.
The UN rights office also said it has verified at least 54 deaths since the coup – though the actual number could be far higher – and more than 1,700 people have been detained.
National League for Democracy party official Soe Win confirmed some officials were arrested in overnight raids but the exact number is not known.
At least one community leader linked to the ousted NLD government, 58-year-old Khin Maung Latt, was killed during a raid at Pabedan township in Yangon, Tun Kyi, from the Former Political Prisoners Society, said.
“He was beaten and taken in a raid last night and it seems he underwent a harsh interrogation,” he told AFP, adding his body had been taken to a cemetery.
State-run media on Sunday warned ousted lawmakers involved in a group called the Committee Representing Pyidaungsu Hluttaw – which is claiming to be the legitimate elected government – that they are committing “high treason” and could be sentenced to death or 22 years in jail.
The junta has declared group members personae non-grata and says those who communicate with them could face seven years prison.
The coup and brutal military crackdown has drawn widespread international condemnation, including sanctions against key military personnel.
Australia’s foreign minister Marise Payne announced on Sunday the country was suspending its defence cooperation program with Myanmar, which included English language training.
Canberra is also reviewing its aid program so money is channelled away from government agencies towards not-for-profit organisations.
Payne also called for the immediate release of Australian economist Sean Turnell, an advisor to Suu Kyi, who remains in detention after the junta arrested him last month.
Burma Campaign UK says at least 12 countries maintain defence cooperation ties with Myanmar.
Sunday saw rallies across Myanmar against the military, with more than seven separate demonstrations in Yangon and at least five in other cities and regional towns, according to Facebook live feeds.
In Bagan, a Unesco World Heritage Site famed for its ancient Buddhist temples, security forces shot a 19-year-old man in the jaw and a woman, 56, was hit by a rubber bullet, rescue team member Ko Ko told AFP.
Yangon-based activist Maung Saungkha said coordinated protests across the country were part of a two-day general strike.
“We are willing to die for our country,” he told AFP.
“This current situation is worse (than the past regime). This time we must fight to win.”
A state-run newspaper on Sunday urged people not to join the rallies.
“The public should be careful not to get involved in the protests to prevent the future of their children being ruined,” the Global New Light of Myanmar said.
The junta also warned civil servants that “they will be fired” with immediate effect from Monday if they continued to strike.
In Yangon’s North Okkalapa township, protesting took on a musical flavour with an impromptu concert, while in South Okkalapa security forces fired live rounds and rubber bullets in clashes with protesters.
“We have four people injured in South Okkalapa, 20-year-old, Zaw Myo Htwe was severely injured with his ear ripped off as well as three rubber bullet wounds in his back,” Lin Htet, from the South Okkalapa protest committee, told AFP.
Security forces used tear gas and fired projectiles at demonstrators in Mandalay, Myanmar’s second biggest city.
Yan Naing from the Mandalay rescue service told AFP that two of his colleagues were shot while driving motorbikes – one managed to escape but the other was taken away by security forces.
Another woman on a motorbike was also shot and authorities removed her from the scene.

Scores of monks in saffron robes staged a sit down protest in the city, with signs saying “we don’t want a military junta”.
At Loikaw, east of the capital Naypyidaw, there were plumes of tear gas and stun grenades set off as well as baton beatings and rubber bullets.
“There were six men shot with rubber bullets, our team handled two injured people,” Saw Wunna, chairman of Shwe Loikaw rescue team, told AFP. (AFP)