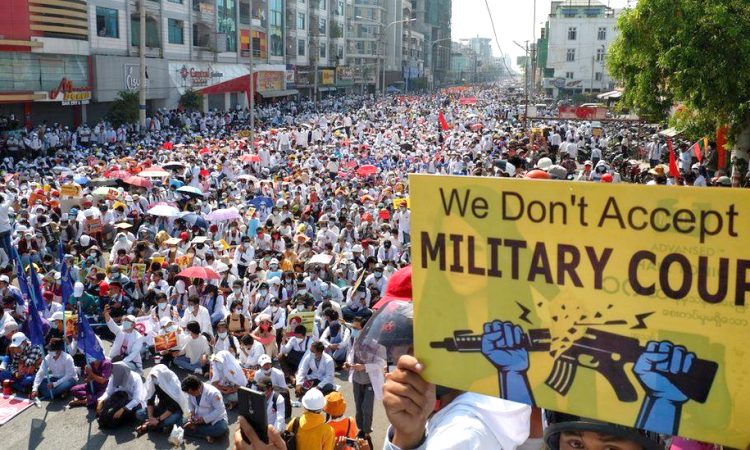 BANGKOK, July 23: Prisoners inside Myanmar’s most notorious jail held a protest Friday, singing popular songs opposing the military government and chanting political slogans, according to nearby residents and to video uploaded to social media.

One video showed a street close to Insein Prison in Yangon with clear audio of voices shouting support for ousted leader Aung San Suu Kyi and ousted President Win Myint.
According to a lawyer representing some of those detained, the prisoners were demanding the release of all those held on political charges, an easing of prison regulations and medical treatment for those who have fallen sick amid spiralling cases of the coronavirus.
The lawyer asked not to be named due to the sensitivity of his position. He said he believed talks were underway.
A resident, who asked not to be named out of fear of possible repercussions, told The Associated Press by phone that she cried when she heard the chants, which lasted for around two hours.
Prison authorities did not respond to a request for comment. Witnesses said military vehicles entered the compound and soldiers were stationed outside.
Myanmar is currently reeling from soaring numbers of Covid-19 cases and deaths that are badly straining the country’s medical infrastructure, already weakened when many state medical workers went on strike to protest the army’s seizure of power.
The country’s overcrowded prisons are especially susceptible to the spread of the virus, according to the Assistance Association for Political Prisoners, which has done surveys of detention facilities.
On Tuesday a member of the executive committee of Aung San Suu Kyi’s National League for Democracy, Nyan Win, died after becoming infected with Covid-19 inside Insein Prison.

Myanmar news anchors told to mind their language as Covid spikes
News anchors in junta-ruled Myanmar have been told to stop using the English pronunciation for Covid-19, with speculation swirling the word has been culled to ensure more positive coverage amid a deadly spike of cases.
For the previous 18 months, anchors on state-backed news programmes had used the English “Covid-19” in their reports on the virus that has rampaged across the world, and is now devastating Myanmar. (AP/AFP)
Authorities reported more than 6,000 cases on Wednesday, up from around 100 per day in early June, with hospitals across the country suffering from a lack of oxygen and doctors.
Amid the spike — and with the junta’s response being widely panned — the two syllables of the English word “nineteen” may have made for uncomfortable listening, as one anonymous post on social media pointed out.
They sound like “winning” and “beating” in Burmese respectively.
Last week, anchors on state-backed TV’s nightly news programmes instead began referring to the virus as “COVID Sel Koe” — the Burmese word for the number.
“I heard that they changed the name as a boon because COVID 19 wins and beats the people,” one user wrote last week on Facebook.
A senior official from the information ministry of the State Administration Council — as the junta dubs itself — denied the switch had been made to remove inauspicious sounds.
“We used to announce the same pronunciation in Burmese and English in the past,” an information ministry official told AFP on Wednesday.
“But for a Burmese audience, we think we should change our pronunciation into Burmese accent.”
“We have no other reason.”
According to state media, authorities have already taken measures to propitiate unseen forces during the spike, urging people around the country to recite teachings of the Buddha to increase protection.
While the majority of people in Myanmar are Buddhist, many also believe in spirits, astrology and “yadaya” — magic used to ward off evil or misfortune.

“I have no idea why the authorities changed its pronunciation,” Tin Htut, a prominent sorcerer, told AFP.
“But I like it. In Burmese rhyme… COVID Sel Koe… Shey Ma Toe (not moving forward).”(AP/AFP)