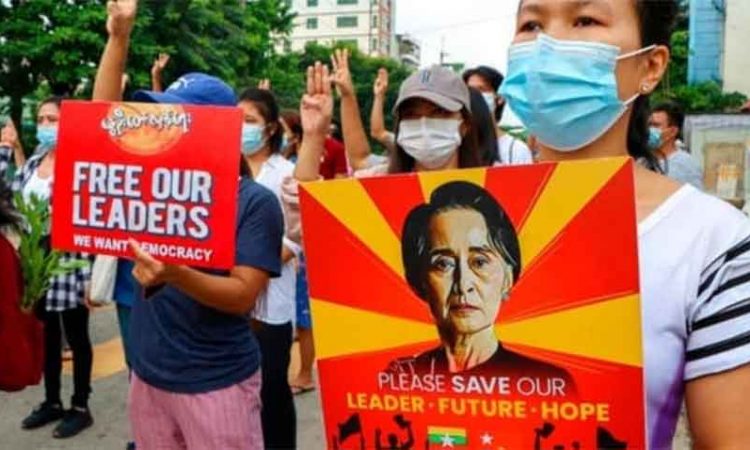 YANGON, MAY 14: Myanmar’s junta has declared martial law in a town in Chin State after blaming “armed terrorists” for attacks on a police station and a bank, state media reported on Friday, amid an upsurge in fighting between the military and ethnic rebels in border areas.

In the face of widespread opposition, the junta has struggled to retain order amid daily protests in cities and fighting in border states since overthrowing elected leader Aung San Suu Kyi to end tentative steps towards democracy.
The unrest in the town of Mindat on Wednesday and Thursday involved about 100 people using homemade guns to attack a police station and about 50 targeting the Myanmar Economic Bank, the state Myanmar News Agency reported.
It said that the security forces had repelled the attack without suffering any casualties.
A document declaring the imposition of martial law in the town in Chin State, which borders India, was posted in The Global New Light of Myanmar, a state newspaper.
Reuters could not independently confirm the state media reports on the situation in Mindat.
But a document posted on social media by local media claiming to be from a rival anti-junta administration in the Mindat area said the declaration of martial law was invalid.
It also said that the fighting was triggered by the army breaking a promise to release 7 civilians detained during recent protests.
A spokesman for the Chinland Defence Force, a newly formed militia, said it was behind the latest fighting and confirmed the authenticity of the document.
“They (the junta) can no longer rule the city except in some areas where they have bases. They have no control in the rural areas”, said the spokesman, who said that one fighter from the force was killed and that clashes were continuing with the army bringing in reinforcements.
A spokesman for the junta could not immediately be reached for comment.
In a further sign of continuing defiance of military rule, video on social media showed pro-democracy supporters chanting “We believe that we gonna win, we must win, we must win” as they marched in Myanmar’s commercial hub of Yangon on Friday.
With 788 people killed in a brutal suppression of protests by security forces, according to an advocacy group, some supporters of the ousted Government have sought military training with insurgents that have battled the military for decades in border regions.
Reuters is unable to independently verify casualties and the military has imposed restrictions on the media, internet services and satellite broadcasts.

Fighting has intensified in some border areas since the February 1 coup, with ethnic militias stepping up attacks, overrunning military posts and downing a military helicopter.
Formed a week ago by the National Unity Government opposed to the Generals, a group called the People’s Defence Forces has enlisted support from ethnic armed groups that have long regarded Mynamar’s military as their greatest foe.
Called to arms since the coup, their fighters have ambushed security forces and assassinated junta-appointed administrators. (Agencies)