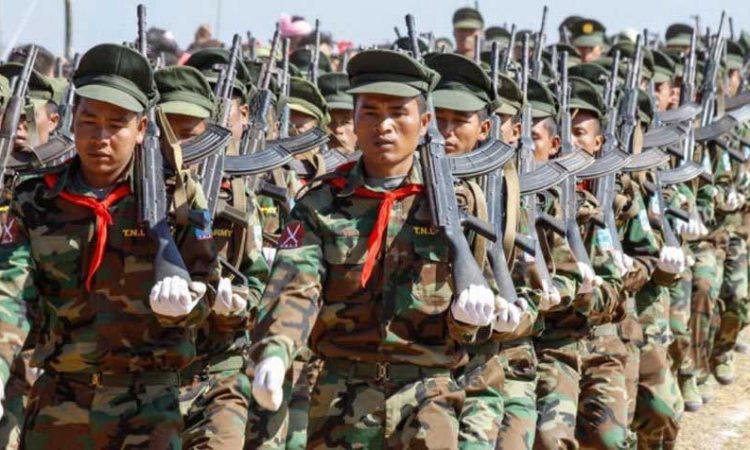 GUWAHATI, March 3: The Myanmar Army has occupied the headquarters of the National Socialist Council of Nagaland (Khaplang) in the Taga area, putting all the militant groups based in Northeast India in total disarray.
Highly placed security sources told The Assam Tribune that the Myanmar Army has already set up a permanent base in the Taga area, where most of the militant groups of the Northeast had their camps and the militants groups have been asked to vacate their camps. Around 500 personnel of the Myanmar Army have moved into the area and took over the NSCN(K) headquarters.
According to reports available, the militants did not offer much resistance during the operation. The Myanmar Army personnel also burnt down a number of camps of the United Liberation Front of Asom (Independent) and other militant groups of Northeast India and seized a huge cache of arms and ammunition.
There was, however, no confirmed report of firing by the Myanmar Army and though it was reported that one ULFA(I) militant was killed in firing, the report could not be confirmed. It is a fact that one hardcore ULFA(I) member recently died due to disease, but there is no confirmation of death of any militant in firing by Myanmar Army personnel, sources said.
The Myanmar government has been asking the NSCN(K) to sign the national ceasefire agreement signed by some other insurgent groups of that country, but the outfit has not done so yet. Moreover, for years, most of the active militant groups of Northeast India, including the ULFA(I) and Manipur-based outfits, have been using the facilities of the NSCN(K) to maintain their bases in Myanmar.
Sources pointed out that for years, the Government of India has been putting pressure on the government of the neighbouring country to evict the camps of militant outfits. But the Myanmar government had very little presence in that area as the terrain put the militants in an advantageous position. However, following sustained pressure from the Government of India and improvement of relations  between the two countries, the Myanmar government established a permanent base of their army in the Taga area and took over the camps of the insurgent groups.
Sources said following the offensive by the Myanmar Army, the militants have now scattered to different places in that country to hide in the jungles. Though no mass exodus of militants from Myanmar to India has been noticed in recent times, the Assam Rifles personnel, who are entrusted with the responsibility of guarding the India-Myanmar border, have been put on high alert. The other forces engaged in counter-insurgency operations in the region have also been asked to keep a close watch on the tracks known to be used by the militants.
Security sources also pointed out that the striking capability of the militants has come down after they lost their bases in Bhutan and Bangladesh, and it would be easier to control militancy in the northeastern region if the militants lose their bases in Myanmar. (Courtesy: AT)