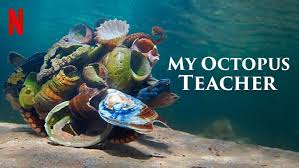 Documentary “My Octopus Teacher”, which reinforces the importance of staying in touch with nature, has won the founder’s prize at the ninth tve Global Sustainability Film Awards.
The film, directed by Pippa Ehrlich and James Reed, vividly relates the bonding and the experiences that filmmaker and diver Craig Foster had in the one year he spent in swimming in the company of an octopus.
This year, Difficult Dialogues, an international forum that discusses pressing issues of worldwide importance each year, partnered with tve Global Sustainability Film Awards for a five-day summit from November 16 that included dialogues, debates and movies and focused on sustainability.
The tve GSFA Founder’s Award for Sustainability on the Big Screen is a nominated category award and was instituted by Surina Narula in 2017.
It is awarded annually to a feature film that best tackles sustainability issues in a new and innovative way. Films are judged on the quality of their storytelling, the creativity of its approach, and the credibility of its sustainability message.
“My Octopus Teacher” is a Netflix Original documentary which released worldwide in September.
It evocatively captures the daily experiences of free diver Foster off the coast of South Africa and his observation of an octopus in her natural habitat and her ability to battle predators and adapt to her environment.
Receiving the award, Reed said making the film was “one of the most enjoyable experiences of all our careers”.
Commenting on the winning film, Narula, MBE, founder of the tve GSFA, said, “The jury was impressed with the almost humanised story of a relationship between a man and an octopus. These emotions describe our relationship with nature and how meaningful it can be for the sustainability of the world.”
In the second nominated category, the Artificial Intelligence Award went to the film “Coronavirus Pandemic: Making Safer Emergency Hospitals”.
These two categories were judged by director-writer Steven Bernstein, marketing expert Denise Parkinson and Narula.
The tve global sustainability awards were also given to eight films in the competitive section. These are Documentary Impact: “Once You Know” and “Our Planet: Our Business” (jointly); Doing Business Differently: “Helping People Put the Planet First”; Transforming Society: “BREEF and Rolex Preserve & Protect Nature”; Campaigning: “10 Myths about Deforestation and Food”; Health and the Environment: “A Failure of the Imagination”; Innovations: “Turning the Tide”; Solutions News Story: “The Man who grew his own Amazon Rainforest”; and Young Filmmaker: “Traces” (Sebastien Pins).
The jury for these eight categories, headed by Nick Nuttall, chose these films from over a 100 submissions from 17 countries.
Because of the coronavirus pandemic, it was a virtual affair this time.
“This year going virtual over five days gave us more time to provide a better experience for filmmakers and the visibility to showcase our youth ambassadors and their work,” said Narula.
The sixth edition of Difficult Dialogues discussed virtually a wide range of topics under the overarching theme of global sustainability by bringing together stakeholders from various backgrounds including sustainability experts, business leaders, change agents, campaigners, filmmakers and students from across the world.
Panel discussions were held on the topic – Changing the mindset; Role of innovation for a sustainable future; the world in 2050; and the Hidden stories, impact journalism: Business and politics of global sustainability.
Difficult Dialogues has focused on themes like global finance and civil society, health, gender, education and law since its inception in 2016.
The event concluded with the announcement of the winners of Daring Debates which featured college finalists from India, Nepal, Myanmar, Bangladesh, the US, Sri Lanka and some African countries who debated the topic: “Is global sustainability profitable for business?”
Gloria Oziohu Alonge from the University of Lagos, Nigeria, was declared winner for the motion while Aditya Dhar from Harvard University, US won against the motion. (PTI)