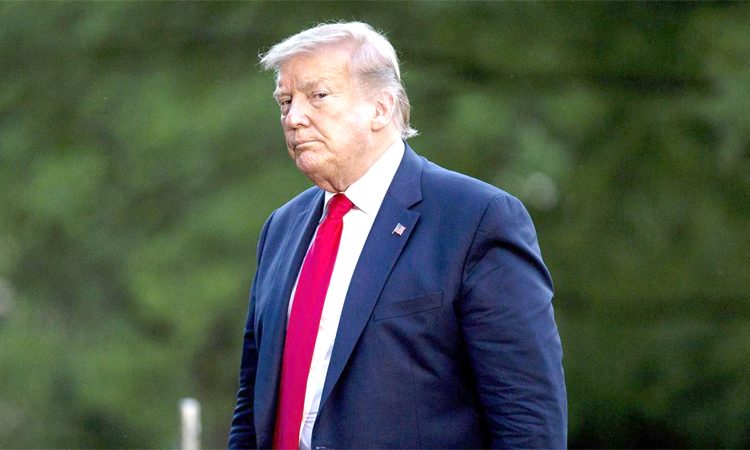 NEW YORK, JANUARY 10: As Saturday dawned on a White House in turmoil, with President Trump unable to communicate on Twitter and other platforms, momentum for impeaching him a second time was rapidly growing among rank-and-file Democrats and some Republicans.

House Speaker Nancy Pelosi on Friday threatened to impeach Trump unless he resigned “immediately” for inciting the mob attack on the Capitol this week, and Senator Lisa Murkowski of Alaska became the first Republican Senator to follow her lead.
“I want him out,” Murkowski told The Anchorage Daily News. “He has caused enough damage.”
The House is next scheduled to be in session on Monday, meaning that articles of impeachment cannot be introduced until then. The timing for an impeachment would be tight because Trump would have fewer than 10 days left in his term.
Yet the Constitution allows House lawmakers to introduce charges and proceed directly to a debate and floor vote in a matter of days, triggering a Senate trial that could take place even after Trump leaves office. If he were convicted, the Senate could vote to bar him from holding office again.
Already, Twitter’s move to permanently suspend Trump “due to the risk of further incitement for violence” has effectively scuttled his favourite method of communicating with the public, even as he retains his authority as Commander-in-Chief. Facebook and other digital platforms have limited his access.
As federal law enforcement officials on Friday announced arrests in connection with Wednesday’s siege, Twitter said that Trump supporters had been using the platform to plan similar attacks, including a proposed one on the US Capitol and state capitol buildings 3 days before President-elect Joseph R Biden Jr’s inauguration on January 20.
In one of his last Twitter posts before being banned, Trump said he would not attend the inauguration. He would be the first incumbent in 150 years to skip his successor’s swearing-in.
Biden on Friday pressed ahead with his agenda, promising an accelerated response to an array of challenges. On Friday, the economy was said to have lost 140,000 jobs in December and officials across the US reported more than 300,000 new Coronavirus cases in a day for the first time.
In a sharp break with the Trump administration, Biden intends to release nearly all available doses of Coronavirus vaccines soon after he is inaugurated, rather than hold back millions of vials to guarantee second doses will be available.
He has vowed to get “at least 100 million COVID vaccine shots into the arms of the American people” during his first 100 days in office.
“Our plan is going to focus on getting shots into arms, including by launching a fundamentally new approach, establishing thousands of federally run or federally supported community vaccination centers of various size located in places like high school gymnasiums and NFL stadiums,” Biden told a radio station in Columbus, Georgia, on Friday.
The Trump administration has shipped more than 22 million doses, and millions more are already in the federal Government’s hands.
Yet only 6.7 million people have received a dose, far short of the federal goal of giving at least 20 million people their first shots by the end of December.
It is unclear how many more COVID-19 inoculations the administration can deliver before Biden’s inauguration, particularly as more senior officials leave the White House in the wake of the mob violence at the Capitol.
Also unclear: what the Republican Party will look like after Trump leaves office.
At a meeting of the Republican National Committee in Florida on Friday, the chaos of the past week was a mere afterthought. While the RNC chair, Ronna McDaniel, condemned the attack on the Capitol, neither she nor any other speaker publicly hinted at Trump’s role in inciting the violence.
“We can’t exist without the people he brought to the party ~ he’s changed the direction of the party,” Paul Reynolds, a Republican committeeman from Alabama, said of the President.
“We’re a different party because of the people that came with him, and they make us a better party.”
Democratic Senators weighed in with support, and some Republicans appeared newly open to the idea. Senator Ben Sasse of Nebraska indicated he would be open to considering articles of impeachment at a trial.
A spokesman for Senator Susan Collins of Maine said she was “outraged” by Trump’s role in the violence, but could not comment on an impeachment case given the possibility she could soon be sitting in the jury.
Even Senator Mitch McConnell, the majority leader and one of Trump’s most influential allies for the past 4 years, told confidants he was done with Trump, although there was no sign that McConnell was joining the calls to remove him. (NYTNS)