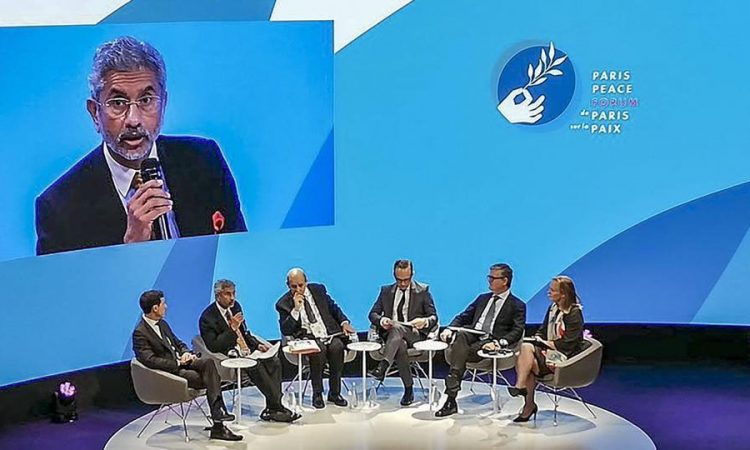 Paris, November 12: Expressing concern over threats posed from cyberspace, India on Tuesday called for coordinated efforts to prevent forces of terrorism and extremism from building their presence in the digital domain.
Speaking at the Paris Peace Forum on issues pertaining to the governance of cyberspace, External Affairs Minister S Jaishankar here said that New Delhi “strongly supports” the Christchurch Call to eliminate rich and violent extremist content online.
Named after New Zealand city where a deadly terrorist attack took place on May 15, the non-binding agreement Christchurch Call has been signed by 18 leaders from around the globe to encourage tech companies and countries to curb extremism online.
“We are excited about the opportunity (given by digital transformation), we are concerned naturally about the threats from cyberspace because there are actors, both state and non-state, whose actions pose a clear threat to national, regional and global security one of the examples of that is the relatively unimpeded growth of terrorism-related activities including extremist propaganda terrorist financing illicit trafficking and radicalisation,” said Jaishankar.
“That is the reason we very strongly support Christchurch Call to eliminate rich and violent extremist content online and we are pleased to work with like-minded countries … We need to get the balance right between the less a fair approach and authoritarian approach and the sense of responsibility becomes very important so,” said he.
He also urged the countries to build “national capacities” to secure the cyber world.
“We need a very clear role and responsibility from states and government to strengthen the respective national capacities when it comes to cybersecurity. States must protect data privacy and make sure data security for all citizens and they maintain openness ta the same time,” said Jaishankar.
The second annual forum was hosted by France. (ANI)