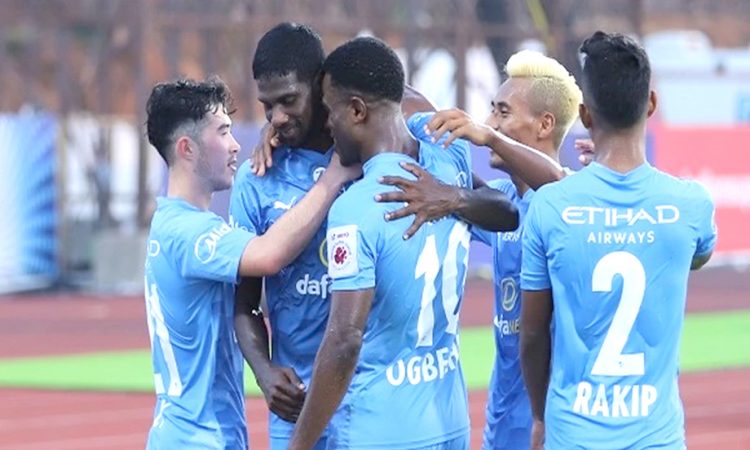 Mumbai City FC went on top of the table with a win over Odisha FC (Image: ISL). Image Credit: ANI

Bambolim, December 9: Mumbai City FC rallied to eke out a 2-1 win over Chennaiyin FC and record their fourth victory on the trot in the Indian Super League here on Wednesday.
Adam Le Fondre smashed in a 75th-minute winner after Hernan Santana (45th) had cancelled Jakub Sylvestr’s first goal.
The Sergio Lobera’s team maintained the top spot in the ISL table.
It’s not often that Lobera makes many changes to his starting eleven. But on Wednesday, four changes were made to the Mumbai City starting line-up with Le Fondre and Santana starting the game. Amey Ranawade and Raynier Fernandes were the other two to come in.
Csaba Laszlo opted for a double change to the team that lost to Bengaluru FC. Fatkhullo Fatkhulloev and Germanpreet Singh started the game for Chennaiyin FC in place of Esmael Goncalves and Anirudh Thapa.
Chennaiyin FC had a perfect start and would have been ahead in the second minute if it was not for Sylvestr missing a sitter. Rafael Crivellaro delivered a perfect corner which was flicked in by Enes Sipovic and found Sylvestr, who missed the target.
Mumbai were not at their best and took time to settle. But they did have their moments. The home side’s best chance came in the 25th minute when Adam Le Fondre had a clear sight on goal, but his powerful drive from inside the box, was straight at keeper Vishal Kaith. The rebound fell to Bipin Singh, but he couldn’t utilise the opportunity.
Chennaiyin were clearly the better side in the opening quarter creating numerous chances through Lallianzuala Chhangte, Sipovic and Crivellaro. The Chennai-based side took the lead in the 40th minute. Sylvestr scored probably the easiest goal of the season.
Chhangte deserved credit for his initial spadework on the right before he played a low cross from the byline to find Sylvestr, who slotted it in.
Just when it looked like Chennaiyin would walk into the breather with a goal advantage, Mumbai’s Santana had different plans. The Spaniard, who was unmarked at the far post, nodded in a Hugo Boumous’ corner to restore parity.
The intensity dropped after the restart but Chennaiyin continued to test Mumbai’s defence. However, Mourtada Fall and keeper Amrinder Singh were at their best in the second half.
Mumbai doubled the lead in the 75th minute through another set-piece. Ahmed Jahouh’s long free-kick was flicked in by Rowllin Borges to Boumous. The Frenchman headed into the path of Le Fondre, who finished from close range.
Chennaiyin nearly scored an equaliser in stoppage time, but Sylvestr’s header narrowly went wide. (PTI)