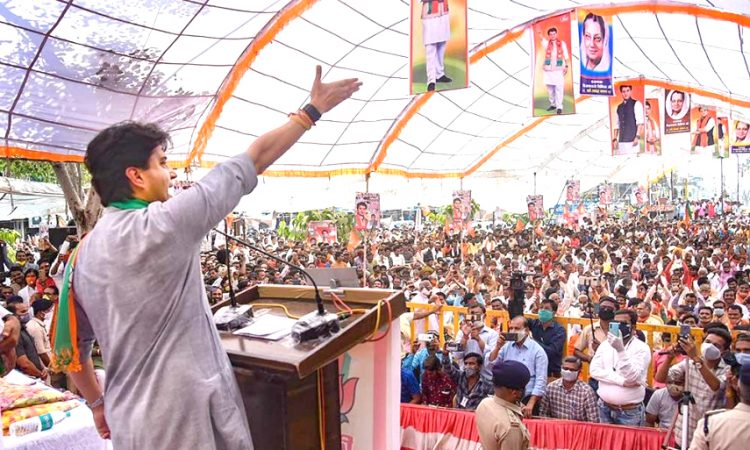 Bhopal, November 1: In a slip of the tongue, BJP Rajya Sabha member Jyotiraditya Scindia asked people to vote for his former party Congress during a campaign for the November 3 by-elections in Madhya Pradesh.
A video, in which Scindia is seen seeking votes for the Congress during a rally in favour of BJP candidate Imarti Devi from Dabra town in Gwalior, has gone viral on social media.
In the video, Scindia is heard saying, “My people of Dabra, raise your hand and make your fist to convince (state chief minister) Shivraj Singh and me, make us believe that you will press the ‘hand’ button on November 3.”
However, the BJP leader immediately amended his sentence and appealed to people to vote for the ‘kamal’ (lotus) symbol of the saffron party.
Taking a dig at the goof-up, the state Congress’s Twitter handle shared the video and said, “Scindia ji, the people of Madhya Pradesh assure you that they will press the key (on EVM) of ‘Hath ka Panja’ (Congress’s symbol) on November 3.”
When contacted, state BJP spokesman Pankaj Chaturvedi told PTI that such a goof-up can happen by any person.
“It was a simple slip of the tongue and this can happen with anybody. Scindia immediately rectified. Everybody knows that he is a BJP leader,” he said.
Scindia, 49, had joined Congress in 2002. After 18 years, he quit the party in March this year.
As many as 22 MP Congress MLAs loyal to him also resigned, which brought down the Kamal Nath-led state government.
Later, Scindia and his loyalists joined the BJP.
Bypolls to a total of 28 seats in the state will be held on November 3. (PTI)