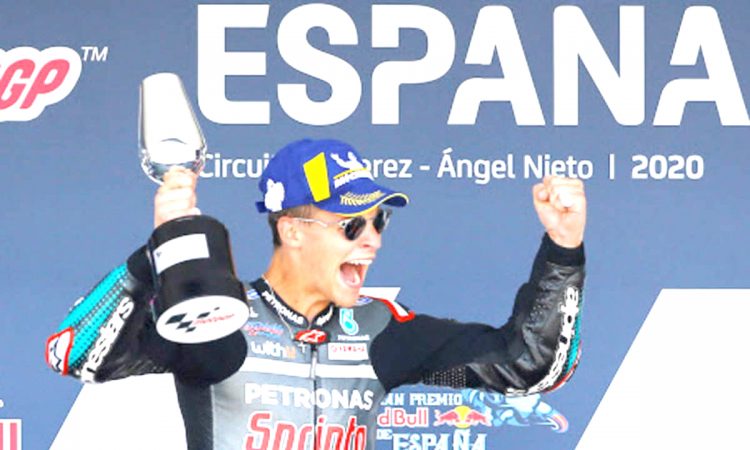 JEREZ DE LA FRONTERA (Spain), July 19: Petronas Yamaha’s Fabio Quartararo won his first ever MotoGP race as he took the chequered flag in an incident-packed race at the Spanish Grand Prix in Jerez on Sunday.
Defending champion Marc Marquez of Honda made two mistakes in the race, with the second leading to a crash at turn four that ended his race with four laps to go.
Frenchman Quartararo’s victory was also the first for Petronas Yamaha as he finished ahead of Yamaha’s Maverick Vinales in second, while Ducati’s Andrea Dovizioso finished third.
From his pole position Quartararo had a poor start and dropped to fourth in the first lap as Vinales took the lead, with Pramac Ducati’s Jack Miller also looking for a podium finish.
There was drama at turn four when Marquez lost control of his front, going off the track and into the gravel, but the defending world champion managed to regain control of the bike to rejoin the race in 18th place.
Vinales, who had started with a soft front tyre, was struggling with 17 laps to go and went wide, dropping to third, while Quartararo took advantage to move back into the lead with Miller in second.
Further back Marquez began to carve his way through the pack and eventually moved up to third with five laps left.
But as Marquez challenged Vinales for second, he was catapulted off his bike at turn four before bouncing off the track and into the gravel.
Marquez walked away from the crash with the help of track marshals but he was visibly in pain after being hit by the bike and was later put in a neck brace before being taken away to a medical centre.
Miller finished fourth while Franco Morbidelli gave Petronas Yamaha another reason to cheer as he came in fifth. (Reuters)