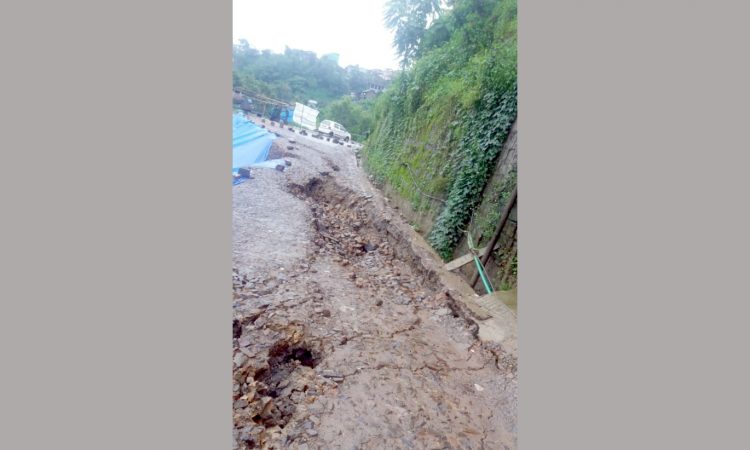 Kohima, July 31: Torrential rain continues to wreck havoc in Nagaland, especially state capital Kohima with more than 50 families being evacuated from around 49 houses damaged by landslide and major roads being blocked since last night, official sources said today.
Damages of 13 houses is being reported from Naga Hospital Colony, 36 houses in Pezielietsie colony within Kohima town affecting at least 54 families since last night, Additional Deputy Commissioner of Kohima, Lithrongla said.
Properties and agricultural fields have been damaged in terms of crores of rupees but no human casualty reported, sources said.
The numbers are increasing every hour as the landslides are occurring continuously triggered by incessant rain, Lithrongla, who is also the vice chairman of Kohima District Disaster Management Authority said adding that major mudslide has also occurred this evening at Officer’s Hill near 4th NAP C Coy camp but details on the damage caused is awaited.
A major traffic easing diversion road for Kohima town – Naga Hospital Junction – Daklane – Census office junction was also completely cut off last night as the retaining wall near wall near Soul Harvest Church was damaged in the mudslide.
Head GB of Daklane, Pukhato Achumi has urged upon the concerned authority to look into the affected areas seriously as the road is one of the major lifeline of the city leading.
ADC Kohima also said that the heavy rain also damaged roads in several places along the National Highway-29 connecting Kohima-Mokokchung completely blocking vehicular movement.
However, restoration works are in progress while passage for light vehicle have been cleared by slashing fresh portion in some places, sources said.
Asked on availability of essential commodities, she said essential commodities like rice and vegetables are being transported by light vehicles but there might be shortage of petrol diesel and gas if the road condition continues to deteriorate.
Landslides on road between Meluri and Kiphire
Additional SP & PRO, Phek, Tokavi Achumi has informed all the commuters crossing Phek district that due to landslides caused by heavy and incessant rain the following places/locations have been severely affected.
The road between Meluri and Kiphire has been blocked at 3 km, 8 km and 16 km from Meluri Town. Massive landslide has also occurred between Meluri and Lanezho at two locations; between Lanye check Gate and BSF Camp and the other is in between Aksah Bridge and Meluri. The road between Chakabama and RD Block, Kikruma has also been blocked due to heavy landslide.
The release said restoration work is on but due to the continuous rainfall, work is being hampered. Police personnel along with concerned Departments, the SDRF team, Phek District as well as volunteers have been deployed. (Page News Service)