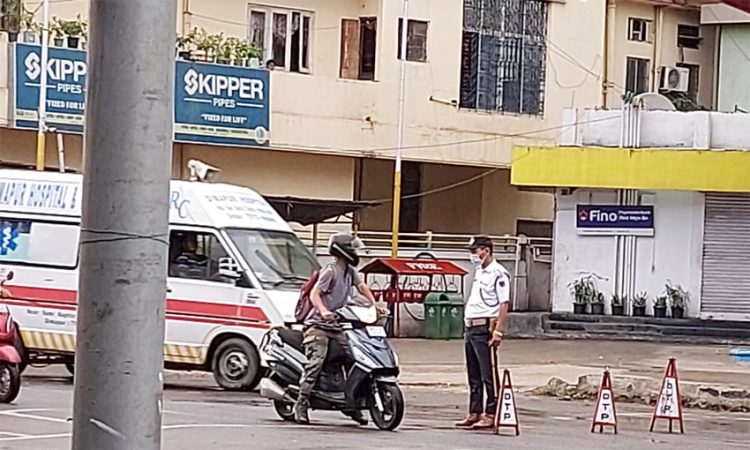 A scooterist being stopped and enquired for moving around in Dimapur after 4 p.m. on June 19. (Page Photo)

DIMAPUR, JUNE 19: The extended lockdown with additional measures began today in the state with Dimapur and Kohima allowing shops to open till 2 p.m.
As per the lockdown measures issued by Dimapur Deputy Commissioner, ban on movement of vehicles and people came into effect from 4 p.m. onwards. However, those in the exempted categories were allowed to move around.

At 4 p.m. Dimapur police personnel, led by their officers, set up check points at various places in Dimapur and stopped vehicles which moved around without necessary permits. While vehicular movement, except the permitted ones, was curtailed to some extent in Dimapur due to the recent order from the DC, movement of people, especially pedestrians, joggers and others were noticed at various parts of the town despite restrictions.
In some areas, people moved freely or sat on the roadside gossiping with each other, while some young boys and girls were seen jogging in areas where police presence was absent. However, a few of them were turned back by the police personnel at DC Court junction when they came out for jogging.
It may be mentioned that similar orders were issued earlier banning movement of people during the lockdown period, except for emergency cases, but as the lockdown period was extended, people began to come out of their homes in groups and move around in the name of “evening walk” or jogging, besides young boys and girls moved around on 2-wheelers. Till June 18, there was no one to check people’s and vehicular movement although the lockdown.
When contacted, PRO, Dimapur Police and ADCP, Relo T Aye told Nagaland Page that lockdown strictures will continue till June 30 next at Dimapur and movement of vehicles and people during the restricted hours would be checked strictly.
He also said people should refrain from coming out of their homes as movement of people and vehicles has been enforced from 4 p.m. onwards.
Meanwhile, as the lockdown was extended till June 30, there is resentment among certain sections of the business community, whose shops are yet to open even after 1-and-half month.

A trader at Hong Kong Market said that though shops selling mobile phones and accessories, electrical items have been allowed to open, shops selling clothes and footwear have been closed since the lockdown was announced.
He also recollected last year’s lockdown when Hong Kong market and New Market traders faced the brunt of the lockdown measures and lost their hard-earned savings. He said that many traders dealing in clothes were left with nothing last year and had to resort to some other works to feed their families. This year too, some of them are compelled to pick up different business to earn a living.
Interestingly, in the recent lockdown, some shops which do not figure in the list of shops to be opened from 6 a.m. to 2 p.m. are doing brisk business under the very nose of the district administration.
(Page News Service)