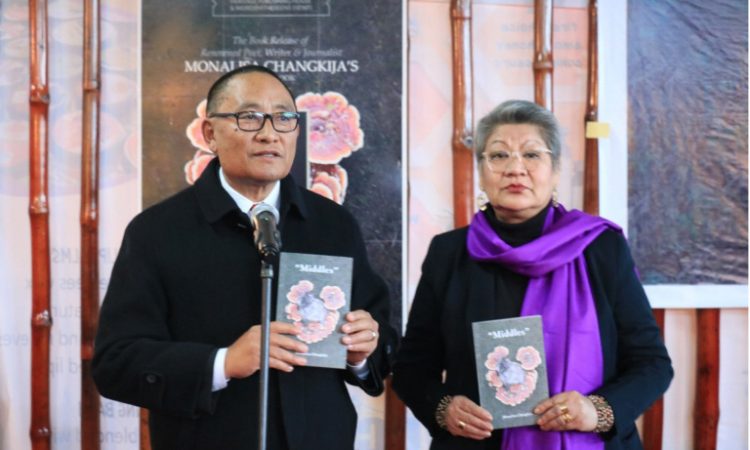 Kohima, December 3: As part of the Hornbill Festival, a book titled “Middles” authored by renowned Naga poet, writer & journalist, Monalisa Chankija was released on Monday by NBCC general secretary, Rev. Dr. Zelhou Keyho at NDBA Hall, Naga Heritage Village, Kisama.
Changkija described “Middles” as story-telling but not fiction. “Literature should provoke thoughts and reform human beings,” she said at the launch of the book.
She added that writers and poets should not only be answerable to the present but also to the future.
Chairperson of the programme, Dr Avinuo Kire who gave a brief profile about the author said that Monalisa Chankija is the only woman editor, proprietor and publisher of an English Daily ‘Nagaland Page’ in the North East. She was awarded the 2009 Chameli Devi Jain Award for an Outstanding Woman Mediaperson. On December 14, 2009 in commemoration of 25 years of Poetry the Poetry Society of India awarded her for her remarkable contributions to poetry in Nagaland. In recognition of her esteemed accomplishments in the field of literature, the Naga Students Union, Delhi has also presented her the NSUD Inspiration Award 2013.
She was also awarded Nagaland Governor’s Award for distinction in literature on January 26, 2014. She was awarded the 30th FICCI Woman Achiever of the Year 2013-2014 for outstanding contributions as a journalist by the FICCI Ladies Organization, Norttheast Chapter on April 26, 2014.
Today, her poems are taught in the under graduate & post graduate English courses in Nagaland University. The Nagaland Board of School Education has also introduced her poems in the Alternative English course for Class IX. The North East Hills University (NEHU) has also selected some of her poems for its M. Phil course.
In the programme, Monalisa Changkij conveyed gratitude to Dr Asangla Tsudir, Editor of Heritage Publications and Rev Dr Zelhou Keyho. (Page News Service)