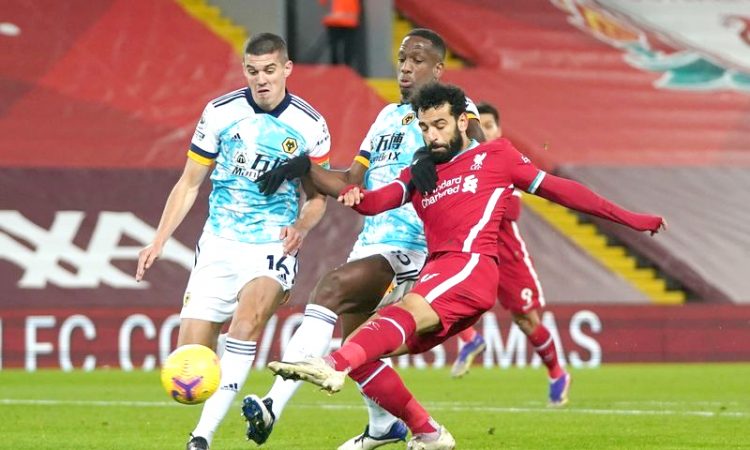 LIVERPOOL, December 7: Mohamed Salah scored one and made another as Liverpool thrashed a hapless Wolverhampton Wanderers 4-0 in the Premier League on Sunday on a night to forget for Wolves captain and former Reds player Conor Coady.
A moment of indecision by Coady, who came through Liverpool’s academy, allowed Salah to steal in and slot home in the 24th minute, and the Wolves defender then thought he had won a penalty only to see the decision overturned following a video review.
Georginio Wijnaldum made it 2-0 in the 59th minute with a brilliant curling effort, seconds after Coady failed to get a shot away when in on goal at the other end, and Joel Matip headed a third from a pinpoint Salah cross eight minutes later.
A Nelson Semedo own goal rounded off the rout in front of 2000 delighted Liverpool fans.
The win lifted Liverpool back up to second in the table on 24 points, behind leaders Tottenham Hotspur, who beat Arsenal 2-0 in the North London derby earlier on Sunday, on goal difference. Wolves are 10th on 17 points.
Tottenham Hotspur back on top as Son Heung-min and Harry Kane sink Arsenal
The Premier League’s deadliest current double-act struck again as Son Heung-min and Harry Kane were both on target as Tottenham Hotspur beat Arsenal 2-0 to return to the top of the table on Sunday.
Kane played in Son after 13 minutes for the South Korean to curl home a majestic opener for his 10th league goal of the season, much to the delight of the 2,000 fans in attendance.
Son then repaid the favour on the stroke of halftime as Kane lashed in his side’s second to become the top scorer in the history of the north London derby with 11 in all competitions.
Victory means Jose Mourinho’s side move two points clear of Chelsea who had claimed top spot on Saturday. They have 24 points from 11 games and are unbeaten in the league since losing on the opening day of the season.
Arsenal were ineffective in attack despite having almost 70% possession, although they did threaten in the second half with Spurs keeper Hugo Lloris making a couple of saves.
But Mikel Arteta’s side remain in 15th place with 13 points after their worst start to a season since 1981.
“It is not just about scoring goals and being world class players. It is about being great guys and doing your best for the team,” Tottenham manager Jose Mourinho said of his scorers.
“(Arsenal) gave us problems, problems we were able to resolve.”
Arsenal dominated the ball but do not possess the cutting edge that Tottenham boast in the form of Son and Kane.
The hosts had barely been in the game as Arsenal started brightly but in a flash they were behind.
Kane controlled the ball and instinctively switched the play to Son on the left. Rob Holding made the mistake of allowing Son to cut in on his right foot and, almost inevitably, Son curled a sweet right-foot effort beyond Bernd Leno.
It was Son’s 10th goal of the season — as many as Arsenal have managed in the league. Eight of those have been assisted by Kane.
The dynamic duo have now combined for 11 goals already this season and 31 in total for Tottenham, second only in the Premier League era to Didier Drogba and Frank Lampard who managed 36 while in tandem for Chelsea.
Arsenal suffered a double blow seconds before halftime.
First Thomas Partey indicated that he was injured, then Tottenham’s right back Serge Aurier snuffed out a dangerous Arsenal move, and played the ball to Giovani Lo Celso.
The Argentine burst forward and fed Son who then played in Kane with a reverse pass and the England striker lashed a left-footed effort into the net via the underside of the crossbar.
Tottenham spent the second half deep in their own half and Alexandre Lacazette forced Lloris into his first save just after the break before extending his fellow Frenchman again with a better effort later on.
Pierre-Emerick Aubameyang headed a Kieran Tierney cross over and there were some encouraging signs for a Arsenal but the reality is their season is already drifting. (Reuters)