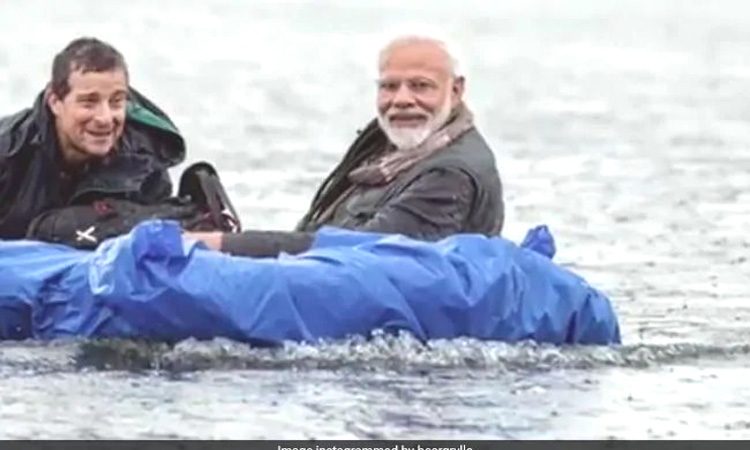 New Delhi, August 12: Walking through the wild and taking a ride on a cold river in a makeshift boat were some of the things that Prime Minister Narendra Modi put up with as he teamed up with survivalist Bear Grylls to promote causes close to his heart conservation of nature and cleanliness.
In Discovery channel’s, “Man Vs Wild with Bear Grylls and Prime Minister Modi”, he braved the rain and cold in the jungles of Jim Corbett National Park in Uttarakhand, and as the host put it, the PM was a “great sport”.
During the conversation, Modi said fulfilling people’s dreams gave him happiness and his focus is on development. “My position never goes to my head,” he said, in reply to a question.
Grylls, who has had celebrity guests before on his show, including former American President Barack Obama, asked Modi about his childhood, dreams as the prime minister, whether he feared anything in life and if he ever felt nervous before a political rally.
Modi said he never had a good answer about nervousness as it was not a part of his temperament.
“My problem is that I have never experienced such fears. I am unable to explain it to people what nervousness is and how to deal with it because my in-built temperament is very positive. I see positivity in everything. And because of that reason, I am never disappointed.”
Grylls said this was a strong message for the young.
If I have to tell anything to the young generation then I will say we should not think of our life in pieces. If we think of our life as a whole then there will be ups and downs. If you are going down don’t think about it because the way up starts from there, he said.
Modi’s talked about living with love for nature and not exploiting it for one’s own ends but leaving it for the future generations.
He said India’s message to the world is Vasudhaiva Kutumbakam, or the whole world is one family.
When Grylls asked whether he ever dreamt of becoming a prime minister, Modi said his focus has always been the development of the nation.
“I was the chief minister of a state first. I worked as a chief minister for 13 years, which was a new journey for me. Then my country decided I needed to do this job. So I have been doing this for the last five years.
“But the focus has been always been on one thing and that is development. And I am satisfied with that job. Today, if I consider this time as a vacation, then I must say I am taking a vacation for the first time in 18 years,” Modi said.
On being the country’s prime minister, Grylls asked whether he ever pinched himself.
“It never occurs to me who I am. I am above all this. When I was a chief minister and even now as the prime minister, I only think of my work, my responsibilities. My position never goes to my head,” he added.
Recalling his childhood years, Modi said though there was poverty, his family was always connected with nature.
So much so that his father, despite there being no money, would buy 20-30 postcards and send it to relatives to inform them about the first rains in their village, he said.
At one point, Grylls, who made a makeshift spear, warned the prime minister about tigers in the area that they were walking through. Modi said, “God takes care of everything”.
He said his beliefs did not allow him to kill anyone but he would hold the spear for the host.
“You should never be afraid of nature because when we think that we are in conflict with nature is when the problem starts,” he said.
Asked whether he was a good student, the prime minister laughed and said, “I can’t say that I was a good student.”
He said that despite poverty, he liked to keep a neat appearance at school, ironing his uniform with coal embers in a copper bowl.
Modi said he left home when he was in his teens and spent his time in the Himalayas.
“I wanted to make a decision about my life. But before that I wanted to understand the world. I wanted to see the spiritual world. For that, I went to the Himalayas. I love nature. I met people in the Himalayas, stayed with them. It was a wonderful experience and I spent a long time there.” (PTI)