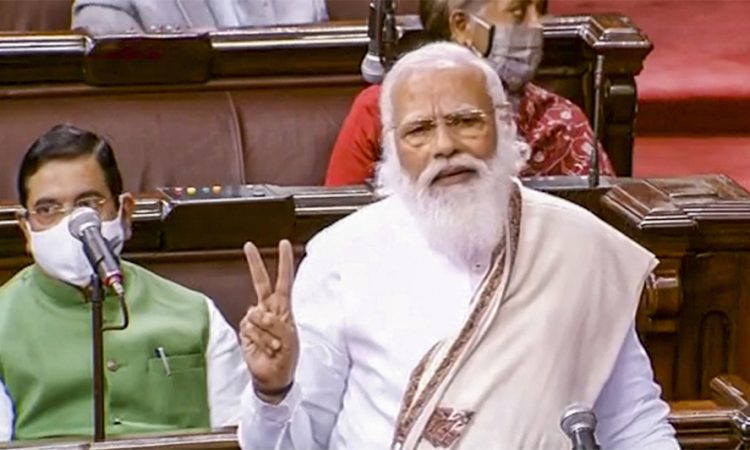 New Delhi, February 8: Prime Minister Narendra Modi on Monday slammed those abusing agitating Sikh farmers, saying it will not do the country any good as he went on to appeal to the protesting farmers to call off their over two-month-long stir, assuring them of continuing with the purchase of crops at an administered price or MSP.

In the same vein, he also hit out at deleterious influences from abroad, referring to them as ‘foreign destructive ideology’, as well as a new “breed” of agitators — ‘Andolan-jivi’ — in the country who cannot live without a tumult.
He dug out old statements such as one by his predecessor Manmohan Singh supporting farm reforms to allow farmers to sell their produce where they get the best price, saying the opposition parties had done a ‘U-turn’ on their own words and they have not been able to give out reasons for the continuation of the farmers’ agitation.
“Give the agriculture reforms a chance,” he said while replying to a discussion in the Rajya Sabha on a motion thanking the President for his address to Parliament at the start of the current Budget session.
In an apparent reference to tweets by pop star Rihanna and Swedish climate-activist Greta Thunberg favouring the agitating farmers, Modi played on the term ‘Foreign Direct Investment or FDI’ to warn against deleterious influences from abroad.
“I see that a new FDI has come to the fore. We have to protect the nation from this new FDI. We need Foreign Direct Investment but the new FDI is ‘Foreign Destructive Ideology’, we have to protect ourselves from it,” he said.
He also hit out at some of the protestors, saying a new crop of agitators has emerged in India who cannot live without agitation and the country should be beware of them.
“There is a new crop of ‘Andolan-jivi’. They live for protests. They look for ways to start a new movement. The country needs to be aware of these Andolan-jivi,” he said.
Thousands of farmers have been camping at Delhi’s borders since November demanding the repeal of three new agriculture laws that they say will end the minimum support price (MSP) based procurement of crops like wheat and paddy by the government and usher in big corporates into the farm sector.
They have rejected the government’s offer to suspend the reforms for 18 months and have not joined talks after 11 rounds of talks ended last month.
The Prime Minister promised to continue with MSP-based procurement at the ‘mandis’ as well as subsidised ration supply through the public distribution system (PDS) to the poor.
He indicated the government was open to amending the laws. “We are ready to remove shortcomings,” he emphasised.
“I assure you that mandis will be modernised,” he said. “MSP was there (in past). MSP is there (now). MSP will remain in the future.”
He also cited former agriculture minister and Maratha leader Sharad Pawar’s support for agriculture reforms to buttress his point on the U-turn by the opposition.
“Those taking a U-turn will perhaps agree with him (Singh)… Whether they were able to do it or not, but everyone has advocated that it should be done,” he said.
Attacking TMC — which his party BJP is challenging in the forthcoming assembly elections in West Bengal, Modi said he was left wondering if party MP Derek O’Brien using phrases such as ‘freedom of speech’ and ‘intimidation’ were for the country or his state.
“He (Derek) sees all this (in West Bengal) 24 hours, so he might have thought that is how it is in the rest of the country too,” he remarked.
The farm laws are aimed at empowering the small and marginal farmers, who make up for more than two-thirds of the farming community in the country and often do not benefit from loan waivers and other schemes as they cannot avail of credit from banks, Modi said.
The government has toughened its stance against the protesters following violence during a tractor rally on Republic Day last month. Three main protest sites have been fortified with concrete barricades, concertina wires and long metal spikes.
In an oblique reference to agitating Sikhs being called ‘Khalistani’ terrorists and other names, the Prime Minister said the nation was proud of every Sikh.
“India is very proud of the contribution of Sikhs. This is a community that has done so much for the nation. The words and blessings of the Guru Sahibs are precious,” he said. “Language used by some for them and attempt to mislead them will never benefit the nation.”
“We mustn’t forget what happened with Punjab. It suffered the most during the Partition. It cried the most during the 1984 riots. They became victims of the most painful incidents. Innocents were killed in Jammu and Kashmir. And the business of weapons was carried out in the northeast. All this affected the nation,” he said.
These laws, he said, address the root cause of the agrarian problem and are aimed at helping small farmers.

“We urge those sitting on the agitation that even though it is their right to agitate, the manner in which the old people are sitting there is not right. They (agitators) should be taken back.
“They should end the agitation and we will together find a solution as all doors are open for dialogue. From this House, I again invite them for dialogue,” he said while appealing to farmers to end their agitation.
All the amendments moved by the opposition to the President’s address, including mention of the repeal of farm laws, were negated. (PTI)