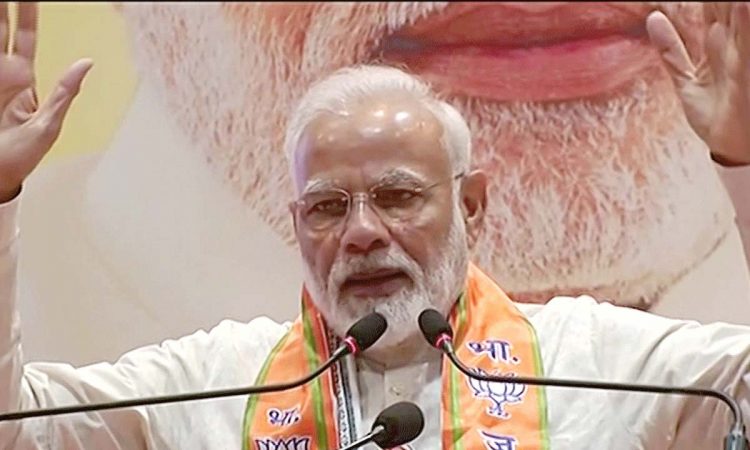 Ballabhgarh (Haryana), October 14: Launching a broadside against the Congress, Prime Minister Narendra Modi on Monday asked the opposition party to explain its love” for Article 370 to the families of security personnel killed in Jammu and Kashmir.
Modi repeated the challenge he made to the Congress a day earlier in Maharashtra, daring it to declare that it will reverse his government’s decision to abrogate the special status for J&K if voted to power.
Addressing the first of his planned four election meetings in Haryana, the prime minister also raised the Rafale jet deal and the law against triple talaq, accusing the Congress of trying to block them.
Modi said while the opposition parties in Haryana are crumbling, the BJP has a strong team and a strong captain” in Chief Minister Manohar Lal Khattar.
The assembly polls will be held in the state on October 21.
India is taking big decisions, which no one could think of earlier, he said, referring to the BJP government’s move on Article 370.
Modi said there was feeling in Haryana and the entire country that J&K needed to be pulled out of the spiral of violence and put on the path of development.
J&K and Ladakh are moving on the path of trust and development and the credit for this does not go to Modi, but to 130 crore people of this country and voters of this country, he said.
You gave us a big mandate and I derive strength from you to realise your dreams, he said.
The entire country is also seeing that people whose interests were affected by the decision on Article 370 are in a state of shock, he said.
These people are raising questions on this decision and seeking help in foreign nations, he added, in an apparent dig at the Congress.
Targeting those who are unable to sleep because of the decision, Modi challenged them to muster courage and tell the people of Haryana that if they win the elections they will bring back Article 370 and 35A.
He had thrown a similar challenge on Sunday when he addressed public meetings in Maharashtra.
Modi referred to the youth from Haryana who had joined the security forces and died in Jammu and Kashmir, their bodies coming home wrapped in tricolour .
Ask those mothers how many sons of the soil lost their lives because of your love for Article 370… ask how many were widowed and how many children were orphaned, he said.
Congress leaders must tell those who lost their dear ones for peace in J&K, why they love Article 370 so much. They must tell in what way this Article benefited the state, he said
He said the Congress should “tell people that it will reverse what Modi has done .
And when the Lok Sabha elections come, mention in the manifesto that they will reverse these decisions. Do they have the courage to say so? he said.
The prime minister said the Dalit community in Jammu and Kashmir was deprived of decent jobs there, never considered capable of jobs other than sweeping and cleaning toilets.
He also accused the Congress of doing vote bank politics over the triple talaq issue, saying the opposition parties made every kind of excuse to stall the law against the practice.
The Congress and parties like it stand like a wall in the way of each betterment and each change. You have seen how they opposed the law against triple talaq, he said.
A day after Congress leader Rahul Gandhi again raked up the Rafale deal, the prime minister claimed that the opposition made its best efforts to get the agreement on the fighter jets cancelled.
You remember how they made a hue and cry over the Rafale deal during the Lok Sabha polls, Modi said, adding he was happy that India has now got its first Rafale aircraft.
He said that it was not acceptable to him that the country’s soldiers become victims in the absence of the necessary arms and ammunition.
Modi accused the previous Congress government of putting the Tejas project, for the home-built jet, on the back-burner.
He began his address by saying the venue was not far from where during the Emergency former prime minister Morarji Desai was arrested and put behind bars for 19 months.
Seeking to strike an emotional chord, he said, “When I am amongst you, when I come to Haryana, I always feel like I am coming home. Haryana taught me a lot.” (PTI)