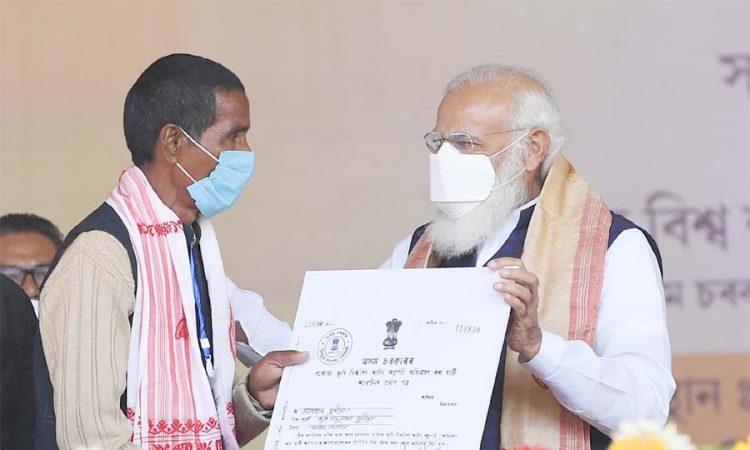 Sivasagar, January 23: Reaching out to the indigenous people of election-bound Assam amid frequent anti-CAA protests, Prime Minister Narendra Modi on Saturday distributed land ownership certificates to over one lakh such families, insisting the move will guarantee them “pride, freedom and protection”.

On his first physical visit outside the national capital this year, Modi reaffirmed the state and the central government’s commitment to protecting the land rights and the unique cultural traditions of the indigenous people.
He also castigated the previous governments for depriving them of their land rights for years since Independence.
“When the Sarbananda Sonowal government took over the reins in Assam, more than six lakh indigenous families had no legal rights over their land. In the last few years more than two lakh such families have been allotted ownership certificates.
“With more than one lakh families added today, the government has shown its commitment to protecting the rights of the indigenous people,” Modi said.
The previous governments in Assam never cared for the rights of those who “loved this sacred land”, he alleged.
“The land ownership certificates (pattas) will guarantee their ‘Swabhiman’ (pride), Swadheenta (freedom) and Suraksha (protection),” the prime minister asserted.
As Modi spoke at the function in Sivasagar, the historical capital of the Asom kings, anti-CAA and anti-NRC protests were staged at several places in Assam. The prime minister, however, steered clear of the controversies surrounding the two and made no mention of these in his speech.
Seeking to impart nationalistic fervour to the event, Modi said Netaji Subhas Chandra Bose, whose 125th birth anniversary was being celebrated on Saturday across the country by his government as ‘Parakram Diwas’ (The Day of Valour), “inspires hope and national pride”.
“Netaji is loved and respected for the sense of pride he instilled in all Indians and his spirit of freedom will guide as we celebrate the day across the country to realise our national goals,” he said.
He asserted that the BJP-led government is committed protecting the land, language and culture of the indigenous people of Assam.
Modi said the state’s BJP-led government had introduced a new land policy in 2019 to give land ownership rights to them.
“They can now improve their living standards by availing of the benefits of a host of central government schemes like PM Kisan Samman Nidhi, crop insurance scheme, and also easily secure farm loans from banks,” he said.
About 70 tribal communities in Assam were provided social security under BJP-led governments at the Centre and in the state, he said.
Modi said, in the last four-years-and-half, his government took steps to honour and promote Assamese literary, cultural and spiritual heritage.
“It should have been the responsibility of all governments to preserve, protect and spread Assam’s cultural heritage. But what happened to the sattras, including Batdarva, the birth place of saint Srimanta Sankardeva, is not hidden from the people of Assam,” he said, apparently referring to alleged encroachment of its land by illegal immigrants.
The sattras are hallowed Vaishnavite monastries in Assam.
The prime minister said the development of Assam and the North East was fundamental to his government’s ‘Atmanirbhar Bharat’ mission.
He said the 1.75 crore Jan Dhan accounts opened by his government proved a boon during the COVID-19 pandemic as relief funds could be directly transferred to the bank accounts of the beneficiaries without any leakage.

Over 50 lakh cooking gas cylinders were distributed to 35 lakh households under the Ujjwala scheme during the pandemic, he said.
Reaffirming his commitment to restoring peace in the North East, Modi said the historic Bodo accord signed last year, and the subsequent Bodoland Territorial Council election gave a fresh impetus to the state’s development.
Noting that Assam and other states of the North East formed the cornerstone of his government’s ‘Act East Policy’, Modi said improved surface, water and air connectivity has opened new vistas of development in the region. (PTI)