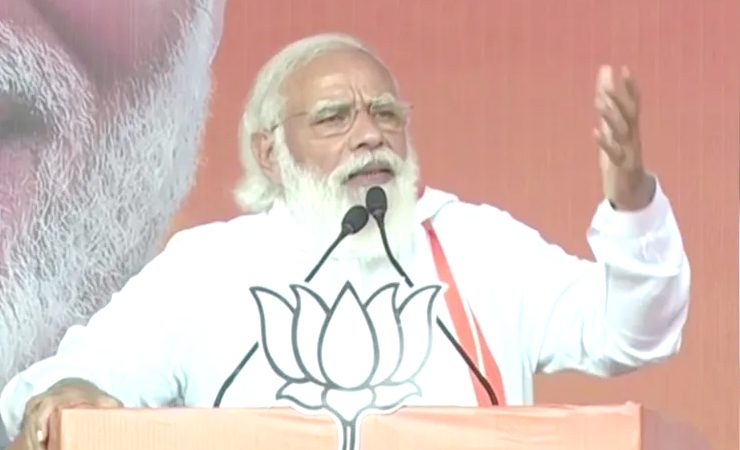 FORBESGANJ/SAHARSA, November 3: Prime Minister Narendra Modi on Tuesday mocked the Congress for its shrinking numbers in the two Houses of Parliament which have dropped below 100, claiming people were punishing the party for its false promises of poverty eradication and farm loan waiver.
Mounting an unsparing assault on the RJD-Congress alliance in Bihar on the last day of his campaign blitzkrieg to power the NDA to a fourth straight term in office, Modi repeatedly reminded the people of the ‘Jungle Raj’ they presided over when rampant booth capturing robbed the poor of their right to vote.
Under chief minister Nitish Kumar, he asserted, the state had left behind the “darkness of insecurity and anarchy”.
Modi said the Congress’ “false promises” of poverty eradication, farm loan waiver and one rank-one pension for retired servicemen had left people angry.
“Now, whenever people get an opportunity, they punish the Congress. Public anger has reduced the party to such a sorry state that it has been left with less than 100 MPs in both Houses of Parliament together.
“In states like UP and Bihar, they have been relegated to the third, fourth of fifth position, and are piggybacking on other parties for survival,” he said, taking a swipe at the main opposition party while addressing an election meeting in Forbesganj town of Araria district.
The BJP won nine of the 11 Rajya Sabha seats, results of which were declared on Monday, taking its tally up to 92 in the Upper House and bringing down the Congress’ to 38.
It’s for the first time in its history that the Congress has just 89 lawmakers in Parliament.
Addressing the rally when the 2nd phase of the state assembly polls were under way, the prime minister said the voting trend suggested people had rejected the “double yuvraj” (two crown princes), an expression he has coined for Congress leader Rahul Gandhi and RJD’s Tejashwi Yadav.
“In Bihar, rangbaazi (rowdyism) and rangdaari (extortion) are losing and vikas (development) and kanoon kaa raj (rule of law) is winning, parivarvaad (dynasty rule) is being defeated by janatantra (democracy), and sweat of labour is set to triumph over arrogance,” he asserted.
Recalling the state’s notoriety for booth capturing in the 1990s, the prime minister said, “They (NDA’s predecessors in government) had deprived the poor of even their right to vote. The poor were not even allowed to set their foot out of their home on the voting day. The NDA restored their right to vote, empowered them.”
Repeatedly calling the 15 years of Lalu-Rabri rule “jungle raj”, he said its proponents did not want the people of Bihar to chant ‘Bharat Mata Ki Jai’ and ‘Jai Shri Ram’.
“If they are uncomfortable with those who chant ‘Bharat Mata Ki Jai’, Bihar is also uncomfortable with them,” he told another rally in Saharsa. Katihar, Purnea and Kishanganj districts adjoining Saharsa have substantial Muslim population.
The prime minister said under Chief Minister Nitish Kumar, Bihar had left behind the darkness of “insecurity and anarchy” of the RJD rule.
“Roads and markets today bustle with people even late at night,” he said.
Accusing the previous RJD governments of being steeped in corruption, the prime minister said,”They are again looking at Bihar greedily like a glutton who has eaten his fill but wants more”.
Modi said Nitish Kumar laid the foundation of ‘Atmanirbhar Bihar’, a self-reliant state, as the chief minister.
Now IT parks, software parks, food processing units, medical and engineering colleges will come up to create a self-reliant Bihar, he said.
The prime minister made a fervent pitch for his ‘vocal for local’ campaign to promote local enterprise.
“If we don’t tell people about our products, who will? Take for example Khadi. It’s not a new fabric. But it was sold many times more in the five years since 2014 than it was in the preceding 25 years. This is how you become vocal for local, and the local goes global in no time,” he said.
Modi also sought to dismiss any perception of an anti-incumbency factor against the Nitish Kumar government,
and said : “The last decade was spent taking care of the needs. This decade will be dedicated to fulfilment of aspirations. From gas cylinders we are going to move to gas pipelines and after having built roads we are focusing on building airports.”
The prime minister also expressed delight over the better than expected voter turnout, and said, the enthusiasm of people in the face of the pandemic presented before the world evidence of democracy’s deep roots in Bihar.
The prime minister, arguably the biggest star campaigner of the NDA by virtue of his crowd-pulling abilities, also mocked the opposition for being “puzzled as to why Modi keeps winning elections. They should realise that the reason is simple I am in tune with the needs of my mothers and sisters and I try to address these”.
Modi, during the rallies he addressed in Bihar, castigated the RJD-led Grand alliance over alleged corruption and lawnessness.
At every rally, he made it a point to mention the names of the four NDA constituents–the BJP, JD(U), HAM and the Vikassheel Insaan Party (VIP), but was silent about Chirag Paswan and his LJP, which has walked out of the alliance in Bihar but is a partner in New Delhi. (PTI)